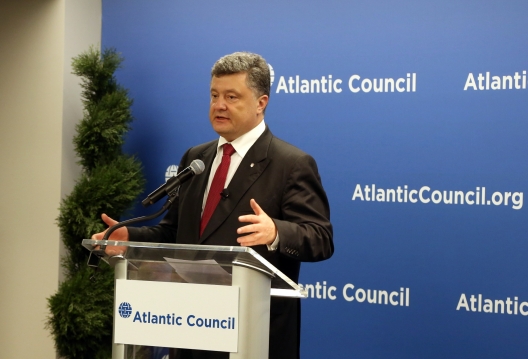 While [Ukrainian President Petro] Poroshenko was asked several questions during his visit, there are three key ones that should have been asked to better understand his point of view and the way ahead for his country:

* What is the next step based on the results of your visit to Washington and to the NATO Summit?  Poroshenko’s visit here, while not completely without result, did not go far enough in supplying the lethal equipment he says Ukraine needs to end the conflict in the East. He finds himself in the middle of U.S. domestic politics between a White House who offered $46 million in non-lethal equipment only and a Congress looking to vote on a $350 million offer that could include some defensive lethal capabilities such as anti-tank systems. As he told Congress, “Blankets and night vision goggles are important, but one cannot win a war with blankets. . . .”

* How much is too much to give away? The 12-point ceasefire protocol is advantageous to both the separatists and to Russia itself. The subsequent legislation devolving judicial and police rule to the Donbass region, which Ukraine’s parliament (the Rada) passed, only reinforces that belief. In the meantime, while Poroshenko was able to claim victory by signing the EU agreement, he also quietly bowed to EU pressure to broker a peace deal that is overly favorable to Russia, deferring much of the financial implementation to late 2015. However, Ukraine knew the Donbass was lost either way. There is every expectation that Russia will allow things to cool off for now, but come 2015 and the impending EU implementation Poroshenko and the west should expect more Russian moves designed to undermine this agreement. Therefore, did he and the Rada give too much away, and lose much-needed domestic support, by not pushing ahead with the EU agreement’s full implementation now? . . .

* How do you plan on tackling corruption and government reform? . . .  Bribery is rampant in Ukraine; one in three Ukrainians are asked to pay a bribe and eight in ten pay. This compounds government structures that still emulate Soviet bureaucracies 20 years after the collapse of the USSR. While Ukrainians are united in the fight against Moscow and the separatists it supports, Ukraine’s pervasive corruption and inability to provide essential services to its citizens is causing many Ukrainians to lose faith in its new government. . . . What further steps he will take in that direction requires deeper analysis if he seeks to enlist the help of the United States as he desires to have in this effort.

Mark Seip is the senior Navy fellow at the Atlantic Council, a think tank on international affairs. The views expressed are his own and do not represent the Department of Defense.