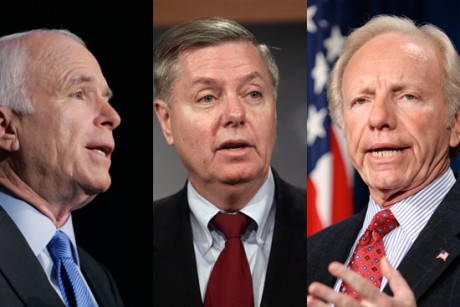 From John McCain, Joseph I. Lieberman and Lindsey O. Graham, the Washington Post:  The U.S. reluctance to intervene in Syria is, first of all, allowing this conflict to be longer and bloodier, a radicalizing dynamic. Contrary to critics who argue that a greater U.S. role in Syria could empower al-Qaeda, it is the lack of strong U.S. assistance to responsible fighters inside the country that is ceding the field to extremists there.

It is not too late for the United States to shift course. First, we can and should directly and openly provide robust assistance to the armed opposition, including weapons, intelligence and training. Whatever the risks of our doing so, they are far outweighed by the risks of continuing to sit on our hands, hoping for the best.

American help should go to those groups that reject extremism and sectarianism in both word and deed. As in Libya, the relationships we build with armed groups inside Syria now will be indispensable going forward.

Second, since the rebels have increasingly established de facto safe zones in parts of Syria, the United States should work with our allies to reinforce those areas, as Secretary of State Hillary Rodham Clinton suggested last week. This would not require any U.S. troops on the ground but could involve limited use of our airpower and other unique U.S. assets.

We know there are risks associated with deepening our involvement in the profoundly complex and vicious conflict in Syria. But inaction carries even greater risks for the United States — in lives lost, strategic opportunities squandered and values compromised. By continuing to sit on the sidelines of a battle that will help determine the future of the Middle East, we are jeopardizing both our national security interests and our moral standing in the world.

John McCain and Lindsey O. Graham, both Republicans, represent Arizona and South Carolina in the Senate, respectively. Joseph I. Lieberman, an independent, represents Connecticut in the Senate. (graphic: Salon)