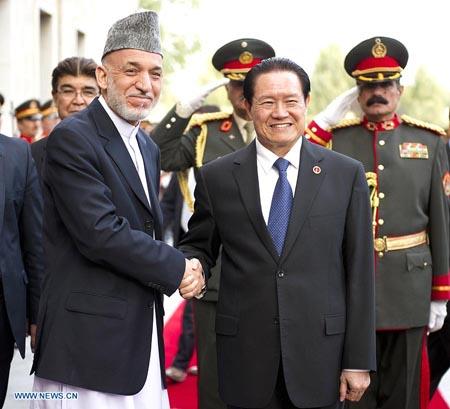 From Rob Taylor, Reuters:  China has signed security and economic agreements with Afghanistan during a rare trip to Kabul by a top Chinese official, in deals seen aimed at bolstering Beijing’s influence ahead of a NATO withdrawal of most combat forces by 2014.

Zhou Yongkang, China’s domestic security chief and a member of the ruling Communist Party’s central Politburo, made an unannounced visit to the Afghan capital late on Saturday, holding talks with Afghan President Hamid Karzai at his garden palace.

Zhou’s visit was the first to Afghanistan by a senior Chinese leader since 1966 and followed a visit by Karzai to Beijing in June when both countries agreed to cooperate on combating extremism in the region.

During the talks, held under tight security after violent protests in Kabul over a film which insults Islam, Zhou signed agreements on increased security and economic cooperation, including a deal to help "train, fund and equip Afghan police".

The agreement was not specific on how much assistance China planned to give the 149,000-strong police force, which is currently trained by the NATO-led coalition. . . .

Resource-hungry China, which has a small border with Afghanistan in the country’s mountainous north-eastern corridor, is keen to invest in Afghan resource deposits worth as much as $1 trillion, based on U.S. Pentagon estimates.  (photo: news.cn)