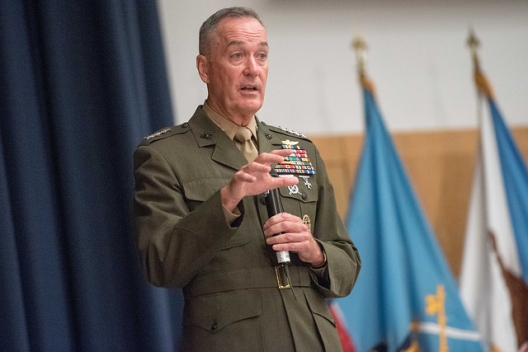 The threat baseline, he [Chairman of the Joint Chiefs of Staff Gen. Joseph Dunford] said, is four-plus-one: Russia, China, Iran, North Korea and violent extremism. Four are nation states that can cause varying degrees of concern. The fifth threat, terrorism, can flare up in any part of the world….

“We use those four state actors and one nonstate actor … to get an appreciation for where is the force relative to where it needs to be,” Dunford said….

Now, he said, “it is no longer the military campaign that is going to be the determining factor in the success in Iraq. The interactions of governments in Iraq, the role of Shia militia forces, the relationship of the Peshmerga in the north with the Shia and government — all those things have to be sorted out.”

Meanwhile, the United States is supporting 14,000 Arab fighters and upwards of 30,000 Kurds during the counter-ISIL campaign in Syria, said Dunford, who noted there’s been much ground retaken there from ISIL….

ISIL is also in Afghanistan, West Africa and is trying to gain adherents in Southeast Asia. The United States will confront the group wherever it goes, Dunford said.

The U.S. competitive advantage in many of these areas is getting smaller, the chairman said.

Dunford said he’s concerned about Russia’s behavior, including its annexation of Crimea, its actions in Eastern Ukraine, it threats to Georgia and Moldova, and its aid to Syria.

Russia is engaging in these actions in an attempt, Dunford said, to “undermine the most successful alliance in history — the NATO alliance.”

He added: “From a U.S. perspective, I would tell you I believe our center of gravity as a nation, through a security lens, is the network of alliances. Russia is trying to erode that.”

Russia and China are separately concentrating on anti-access, area denial strategies, but for similar ends, the chairman said.