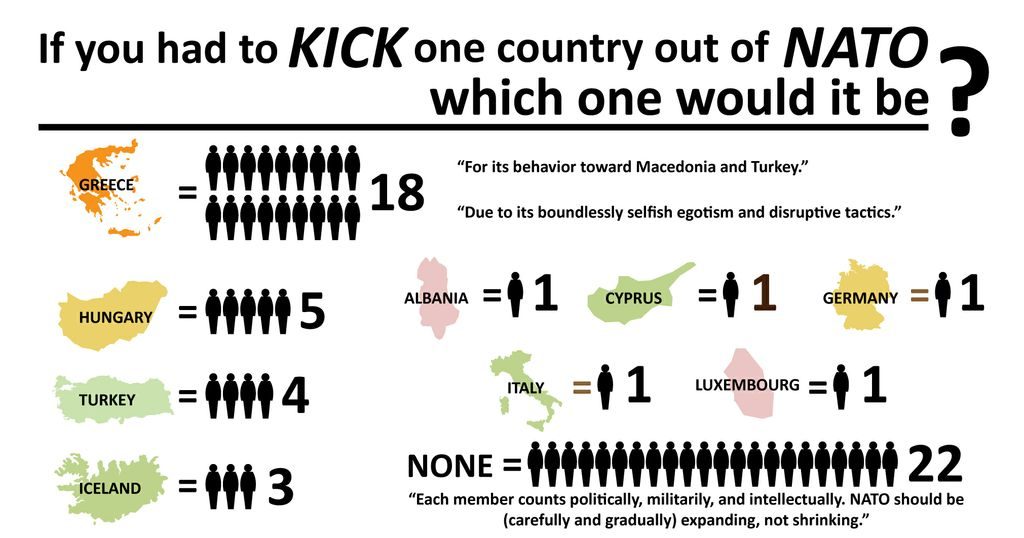 In a just released Atlantic Council-Foreign Policy survey, experts voted Greece as the country they were most likely to “kick out of NATO.” Heads of state, ministers of defense and foreign affairs, a head of intelligence, plus current and former members of Congress were among the dozens of expert respondents from the U.S., Canada, and Europe.

As international leaders converge on Chicago this week for the NATO Summit, the Atlantic Council and Foreign Policy partnered to ask about the relevance and future of the world’s most powerful alliance. None of the respondents thought NATO should cease to exist or that the United States would be better off leaving the Alliance, but they were less certain that NATO can adapt to a changing geopolitical and military landscape—and just who will foot the bill for future operation.

•    More respondents think NATO should not intervene in Syria, with one stating, “Are you kidding? NATO does not have the resources: no will, limited skill, no tools.”
•    Respondents are nearly split equally on the question of whether or not Al Qaeda will return to Afghanistan once the International Security Assistance Force mission ends.
•    Most participants believe that the European members of NATO could not have conducted the Libya operation without US assistance.
•    Almost all of the respondents feel NATO should have offensive cyber capabilities.

Read the entire survey results and see the full list of respondents at /event/atlantic-councilforeign-policy-survey-future-nato.