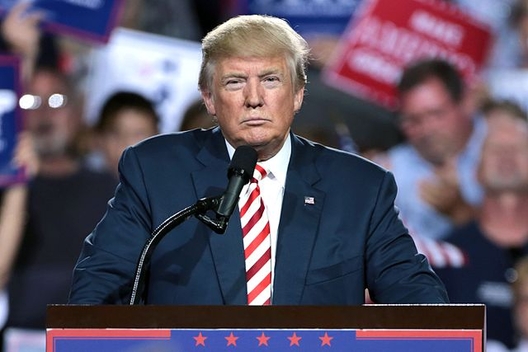 Remember I went to NATO a year ago and these fake people back here they were saying, Donald Trump’s performance at NATO was unacceptable. You know why? You know why they said it? Because I told the people of NATO standing right behind me while they were standing right behind me – they’ve been delinquent. They haven’t been paying. I said, you gotta pay. You gotta pay. You gotta pay – and now they’ve taken in – because of that. And I guess I implied you don’t pay we’re out of there; right? And I took more heat from the press – they said, Donald Trump was rude to our allies well, they’re rude to us when they don’t pay. Right? They’re rude to us.

In the last short period of time, Stoltenberg, who’s the head of NATO – he’s my biggest fan in the whole world because he couldn’t get anybody to pay. We’ve taken in $11 billion extra and going into 2020 or 2021 we will have taken in $33 billion extra and they aren’t even doing what they should be doing – just so you understand. It’s terrible – the way our country has been disrespected. But we will be disrespected no longer; okay?

Now tomorrow morning you’ll see from these fakers back there, Donald Trump again disrespects NATO. I don’t disrespect NATO. I think NATO is wonderful. But you know what? We’re paying for 80% of NATO – could be higher. They say 72%. So, we’re paying for 80% of NATO. Now I can only tell you one thing – it helps them a hell of a lot more than it helps us; okay? And they should pay. Germany is paying 1%. We’re paying 4%. Explain that one to me; right? (APPLAUSE)

And Germany has unsustainable cash flow. I read a report – their cash flow is unsustainable. So, I said to Angela – I said Angela, send a little of that cash flow our way. And she said, but Donald, because we’re protecting them – we have 40,000 soldiers in Germany. Nobody even knows that. I said, Angela, let us have some. She said, Donald, the German people wouldn’t be happy with that. I said, you know what, the American people aren’t happy with the way we have it now; right?