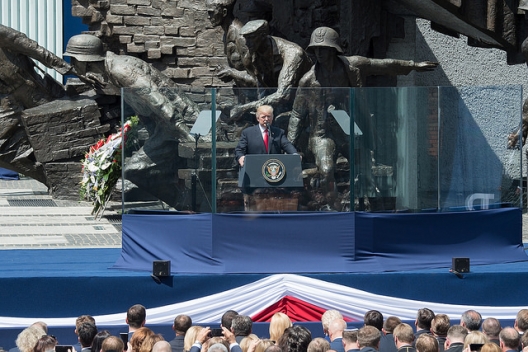 On behalf of all Americans, let me also thank the entire Polish people for the generosity you have shown in welcoming our soldiers to your country.

These soldiers are not only brave defenders of freedom, but also symbols of America’s commitment to your security and your place in a strong and democratic Europe.

We are proudly joined on stage by American, Polish, British, and Romanian soldiers. Thank you….

For America’s part, we have never given up on freedom and independence as the right and destiny of the Polish people, and we never, ever will….

Together, with Pope John Paul II, the Poles reasserted their identity as a nation devoted to God. And with that powerful declaration of who you are, you came to understand what to do and how to live. You stood in solidarity against oppression, against a lawless secret police, against a cruel and wicked system that impoverished your cities and your souls. And you won. Poland prevailed. Poland will always prevail….

You were supported in that victory over communism by a strong alliance of free nations in the West that defied tyranny. Now, among the most committed members of the NATO Alliance, Poland has resumed its place as a leading nation of a Europe that is strong, whole, and free.

A strong Poland is a blessing to the nations of Europe, and they know that. A strong Europe is a blessing to the West and to the world. (Applause.) One hundred years after the entry of American forces into World War I, the transatlantic bond between the United States and Europe is as strong as ever and maybe, in many ways, even stronger.

This continent no longer confronts the specter of communism. But today we’re in the West, and we have to say there are dire threats to our security and to our way of life. You see what’s happening out there. They are threats. We will confront them. We will win. But they are threats….

We are confronted by another oppressive ideology — one that seeks to export terrorism and extremism all around the globe. America and Europe have suffered one terror attack after another. We’re going to get it to stop….

Today, the West is also confronted by the powers that seek to test our will, undermine our confidence, and challenge our interests. To meet new forms of aggression, including propaganda, financial crimes, and cyberwarfare, we must adapt our alliance to compete effectively in new ways and on all new battlefields.

We urge Russia to cease its destabilizing activities in Ukraine and elsewhere, and its support for hostile regimes — including Syria and Iran — and to instead join the community of responsible nations in our fight against common enemies and in defense of civilization itself….

Americans know that a strong alliance of free, sovereign and independent nations is the best defense for our freedoms and for our interests. That is why my administration has demanded that all members of NATO finally meet their full and fair financial obligation.

To those who would criticize our tough stance, I would point out that the United States has demonstrated not merely with words but with its actions that we stand firmly behind Article 5, the mutual defense commitment. (Applause.)

That is why we applaud Poland for its decision to move forward this week on acquiring from the United States the battle-tested Patriot air and missile defense system — the best anywhere in the world. (Applause.) That is also why we salute the Polish people for being one of the NATO countries that has actually achieved the benchmark for investment in our common defense. Thank you. Thank you, Poland. I must tell you, the example you set is truly magnificent, and we applaud Poland. Thank you. (Applause.)

We have to remember that our defense is not just a commitment of money, it is a commitment of will. Because as the Polish experience reminds us, the defense of the West ultimately rests not only on means but also on the will of its people to prevail and be successful and get what you have to have. The fundamental question of our time is whether the West has the will to survive. Do we have the confidence in our values to defend them at any cost?…