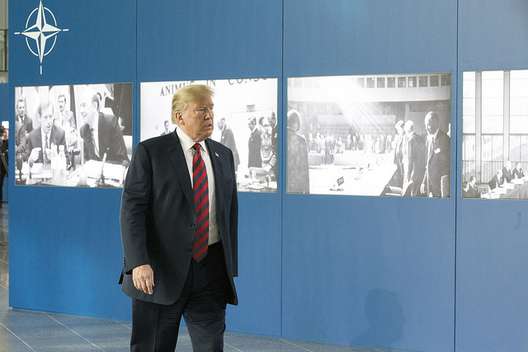 I met them last year. Stoltenberg, Secretary General, great guy, of NATO. Big fan. No one was paying their bills. Last year I went, a year ago. We picked up $44 billion. Nobody reports it. I just left recently and we’re going to pick up at least another, close to a $1 billion extra. I said to him, “you got to pay your bills.”

The United States is paying close to 90% of the costs of protecting Europe. I think that is wonderful. I said to Europe, I said, “folks, NATO is better for your than it is for us.” Believe me. Small countries, big countries, all these countries we are supposed to protect them. I said, “look, it is very simple. You got to pay out. You got to pay your bill.”

Someone said, “Sir!” Someone calls me Sir, that that shows me respect. He says, “would you leave us if we don’t pay our bills?” They hated my answer. I said, “Yeah, I would consider it.” They hated the answer Michael Powell. But if I said, “No, I won’t leave you. I promise you we will always protect you.” Then they will never pay their bills. So I said, “Yes, I will leave you.” You could see those checkbooks coming out for billions of dollars. They paid their bills. I think we will pick up in the next short while over $100 billion.

How about if we got into a conflict because a country was attacked? Now we are in World War III and protecting a country that wasn’t paying its bills.