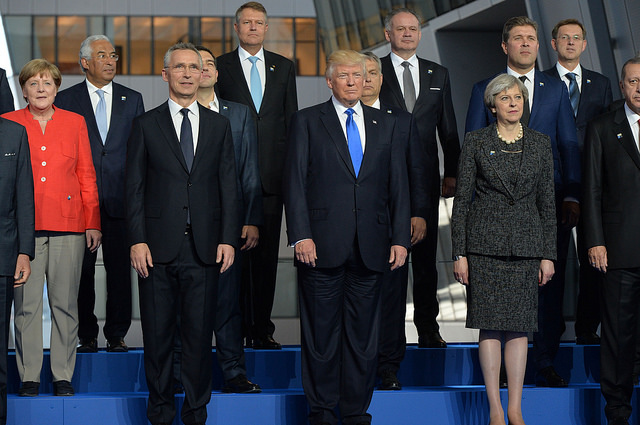 There are few things that President Vladimir V. Putin of Russia desires more than the weakening of NATO, the military alliance among the United States, Europe and Canada that has deterred Soviet and Russian aggression for 70 years.

Senior administration officials told The New York Times that several times over the course of 2018, Mr. Trump privately said he wanted to withdraw from the North Atlantic Treaty Organization. Current and former officials who support the alliance said they feared Mr. Trump could return to his threat as allied military spending continued to lag behind the goals the president had set.

In the days around a tumultuous NATO summit meeting last summer, they said, Mr. Trump told his top national security officials that he did not see the point of the military alliance, which he presented as a drain on the United States.

At the time, Mr. Trump’s national security team, including Jim Mattis, then the defense secretary, and John R. Bolton, the national security adviser, scrambled to keep American strategy on track without mention of a withdrawal that would drastically reduce Washington’s influence in Europe and could embolden Russia for decades.

Now, the president’s repeatedly stated desire to withdraw from NATO is raising new worries among national security officials amid growing concern about Mr. Trump’s efforts to keep his meetings with Mr. Putin secret from even his own aides, and an F.B.I. investigation into the administration’s Russia ties….

American national security officials believe that Russia has largely focused on undermining solidarity between the United States and Europe after it annexed Crimea in 2014. Its goal was to upend NATO, which Moscow views as a threat.

Russia’s meddling in American elections and its efforts to prevent former satellite states from joining the alliance have aimed to weaken what it views as an enemy next door, the American officials said. With a weakened NATO, they said, Mr. Putin would have more freedom to behave as he wishes, setting up Russia as a counterweight to Europe and the United States.

An American withdrawal from the alliance would accomplish all that Mr. Putin has been trying to put into motion, the officials said — essentially, doing the Russian leader’s hardest and most critical work for him.

When Mr. Trump first raised the possibility of leaving the alliance, senior administration officials were unsure if he was serious. He has returned to the idea several times, officials said increasing their worries….

[B]oth European leaders and American officials emerged from the two days in Brussels shaken and worried that Mr. Trump would renew his threat to withdraw from the alliance.

Mr. Trump’s skepticism of NATO appears to be a core belief, administration officials said, akin to his desire to expropriate Iraq’s oil. While officials have explained multiple times why the United States cannot take Iraq’s oil, Mr. Trump returns to the issue every few months.

Similarly, just when officials think the issue of NATO membership has been settled, Mr. Trump again brings up his desire to leave the alliance.