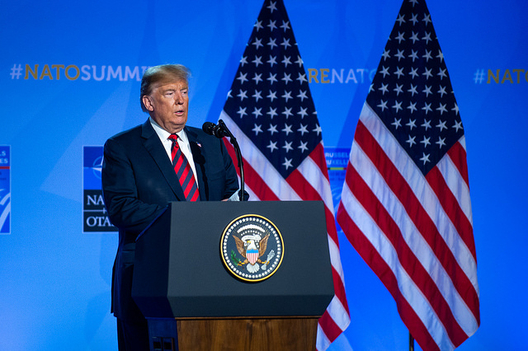 MAY: President Trump has been clear about how he sees the challenges we face. And on many, we agree….

the need for NATO Allies to increase their defense spending and capability, on which we saw significant increases at yesterday’s summit. This includes Afghanistan, where this week I announced a further uplift of 440 UK troops — an ongoing commitment to a mission that began as NATO’s only use of Article 5, acting in support of the U.S.

Finally, let me say this about the wider transatlantic relationship: It is all of our responsibility to ensure that transatlantic unity endures, for it has been fundamental to the protection and projection of our interests and values for generations.

With U.S. leadership at its foundation, its beating heart remains our democratic values and our commitment to justice. Those values are something that we, in the UK, will always cherish, as I know the U.S. will too. It is the strength of these values and the common interests they create that we see across the breadth of our societies in North America and Europe.

And that is why I’m confident that this transatlantic alliance will continue to be the bedrock of our shared security and prosperity for years to come.

TRUMP: Prime Minister May and I have just come from a very productive NATO summit — that was truly a productive summit –where my top priority was getting other NATO members to pay their full and fair share. And the Prime Minister was right there with me.

I want to thank you, Prime Minister, for the United Kingdom’s contribution to our common defense. The UK is one of the handful of nations — 5 out of 29 — not good, but it’s going to get better really fast — in addition to the United States meeting the 2-percent GDP minimum defense spending commitment.

During the summit, I made clear all NATO Allies must honor their obligations, and I am pleased to report that we have received substantial commitments from members to increase their defense spending and to do so in a much more timely manner….

Q Jonathan Swan from Axios. Mr. President, two questions, if I may. The first one: Now your British trip is coming to a close, could you tell us the three or four things you hope to achieve in your meeting with Vladimir Putin? And the second question: What’s the benefit to America of having tens of thousands of American troops stationed in Europe? Thank you.

TRUMP: So I’ll be meeting with President Putin on Monday. We go into the meeting with a tremendous meeting that we had with NATO. Most of you have reported it correctly. It was — certainly it was testy at the beginning, but at the end, everybody came together and they agreed to do what they should do — and actually, what they’ve committed to do, which you fully adhered to. You didn’t have a problem, but some people did. And we left that meeting, I think, probably more unified and wealthier as a group than ever before. So we go in strong….

TRUMP: Well, look, there is a benefit. There’s a psychological benefit and there’s a military benefit. There’s also a benefit not to do it. I mean, I was prepared to do things that would have been somewhat harsh yesterday. A lot of people were surprised that NATO all came together at the end.

But — and it wasn’t a threat. I mean, it was just an unfair situation. The United States was paying, you know, anywhere from 70 to 90. And I choose 90, depending on the way you want to calculate. We were paying 90 percent of the cost of NATO. And NATO is really there for Europe, much more so than us. It helps Europe whether — no matter what our military people or your military people say, it helps Europe more than it helps us.

Q — and I wonder if — are you giving Russian President Vladimir Putin the upper hand heading into your talks, given that you are challenging these alliances that he seeks to break up and destroy?…

I’ll give you an example — and you know this is a confirmed number — $34 billion more was raised since I became President, in NATO. That means that the other 28 countries have put in $34 billion more into NATO. Do you think Putin is happy about that? I don’t think so. But we have a lot of false reporting in this country….

I can’t really overestimate how big the meeting was yesterday with NATO. We went with something that really was an unfair situation to something that’s unified. I mean, they had spirit. Those people were getting up, and in the end, “Well, we are committing and we’re” — you know, they can’t go — it’s not like they can go immediately back. They have to go through their parliaments and their congresses and their representatives, and whoever, whatever forum they have. But they have to go through an approval process.

But I’ll tell you what: Every single person in that room was gung-ho to get it done, get the money. And even before that, as you know, $34 billion. And I think that the Secretary General — Stoltenberg is doing a terrific job, by the way — he said yesterday that because of President Trump, we’ve taken in $34 billion more for NATO. And I think the number is actually much higher than that. But $34 billion more, at least. And again, that’s nothing that my opponent would have done. My opponent would have — it would have just kept going down. You know, it was going down. You see what was happening over the years. The numbers were going down. Now the number is way up and now it’s going way up higher. And that was — and he will tell you that that was because of me….