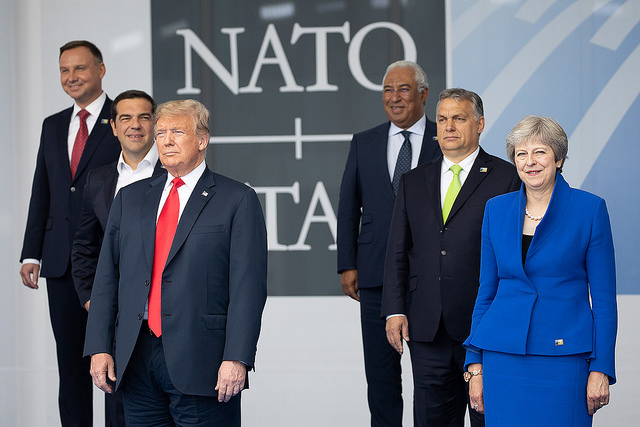 [Excerpts from remarks by President Trump at press conference after NATO Summit, July 12, 2018.

We’ve had a very amazing two-day period in Brussels. And we really accomplished a lot, with respect to NATO. For years, Presidents have been coming to these meetings and talked about the expense — the tremendous expense for the United States. And tremendous progress has been made; everyone has agreed to substantially up their commitment. They’re going to up it at levels that they’ve never thought of before.

So we are — we made a tremendous amount of progress today. It’s been about, at a minimum, they estimate — and they’re going to be giving you exact numbers — but since last year, they’ve raise an additional $33 billion that’s been put up by the various countries, not including the United States.

And the United States’ commitment to NATO is very strong, remains very strong, but primarily because everyone — the spirit they have, the amount of money they’re willing to spend, the additional money that they will be putting up has been really, really amazing to see it. To see the level of spirit in that room is incredible.

And I hope that we’re going to be able to get along with Russia. I think that we probably will be able to. The people in the room think so, but they nevertheless — they really stepped up their commitment, and stepped it up like they never have before….

Q Mr. President, I’m Tara McKelvey with the BBC. Can you tell us whether or not you warned people that the U.S. would pull out of NATO if they weren’t meeting their spending goals?

THE PRESIDENT: I told people that I’d be very unhappy if they didn’t up their commitments very substantially, because the United States has been paying a tremendous amount, probably 90 percent of the cost of NATO. And now, people are going to start and countries are going to start upping their commitments. So I let them know yesterday, actually. I was surprised that you didn’t pick it up; it took until today. But yesterday, I let them know that I was extremely unhappy with what was happening, and they have substantially upped their commitment, yeah. And now we’re very happy and have a very, very powerful, very, very strong NATO, much stronger than it was two days ago….

Q I have a question, again, about — did you ever, at any point, say that the U.S., though, might stop engaging with NATO? And do you think that your rhetoric helps NATO cohesion, or are you worried that people might think that U.S. might not be as committed to NATO? There are a lot of people who say they were worried and stressed by what you did yesterday.

THE PRESIDENT: Well, they were probably worried because the United States was not being treated fairly, but now we are, because the commitment has been upped so much. So now they are. And I was very firm yesterday.

You have to understand, I know a lot of the people in the room. I was here last year. I let them know last year — in a less firm manner, but pretty firm — and they raised an additional $33 billion, I think going to $40 billion. But it’s $33 billion as of today. And then today and yesterday, I was probably a little bit more firm.

But I believe in NATO. I think NATO is a very important — probably the greatest ever done. But the United States was paying for anywhere from 70 to 90 percent of it, depending on the way you calculate. That’s not fair to the United States.

In addition to that, as you know, we’re in negotiations with the EU, and we’re going to be meeting with them next week. We’ve been treated very unfairly on trade. Our farmers have been shut out of the European Union. Now, you could say they’re different, but basically, to a large extent, they’re the same countries.

So I think we’re going to be ultimately treated fairly on trade. We’ll see what happens, but I can tell you that NATO now is really a fine-tuned machine. People are paying money that they never paid before. They’re happy to do it. And the United States is being treated much more fairly….

Q President Trump, Ryan Chilcote, PBS NewsHour. Did you win concessions in your meetings and discussions with the German Chancellor when it comes to German defense spending and also with this issue of purchasing energy from Russia? And secondly, what would you say to your critics that say by creating this scene here at NATO you’re only enabling President Putin and Russia to further disturb things in Ukraine and Georgia?

THE PRESIDENT: Well, if you consider putting up tremendously — you know, the additional funds at a level that nobody has ever seen before, I don’t think that’s helping Russia. I think that NATO is much stronger now than it was two days ago. I think that NATO was not doing what they were supposed to be doing — a lot of the countries. And we were doing much more than we should have been doing.

Frankly, we were carrying too much of a burden. That’s why we call it “burden-sharing.” I was using the term a lot today. “Burden-sharing.” We had a fantastic meeting at the end — 29 countries. And they are putting up a lot. Germany has increased very substantially their time period, and Germany is coming along….

Germany has agreed to do a lot better than they were doing, and we’re very happy with that. We had a very good relationship with Angela Merkel….

Q Thank you. Maybe I’m being dense here, but could you just clarify: Are you still threatening to potentially pull the United States out of NATO for any reason? And do you believe you can do that without Congress’s explicit support and approval?

THE PRESIDENT: I think I probably can, but that’s unnecessary. And the people have stepped up today like they’ve never stepped up before. And remember the word — $33 billion more, they’re paying. And you’ll hear that from the Secretary General in a little while. He thanked me actually. He actually thanked me. And everybody in the room thanked me. There’s a great collegial spirit in that room that I don’t think they’ve had in many years. They’re very strong. So, yeah, very unified, very strong. No problem. Right?…

I’m not negotiating; I just want fairness for the United States. We’re paying for far too much of NATO. NATO is very important. But NATO is helping Europe more than it’s helping us. At the same time, it’s very good for us.

So we have now got it to a point where people are paying a lot more money, and that’s starting — really, last year. It really had — you were there last year. And last year we had a big impact. Again, we took in $33 billion more. And if you ask Secretary General Stoltenberg, he gives us total credit — meaning me, I guess, in this case, total credit — because I said it was unfair.

Now, what has happened is, presidents over many years, from Ronald Reagan to Barack Obama, they came in, they said, “Okay, hey, do the best you can,” and they left. Nobody did anything about it. And it got to a point where the United States was paying for 90 percent of NATO. And that’s not fair. So it’s changed. We had a really good meeting today. We had a great meeting in terms of getting along. I know most of the people in the room because of last year, because of the year and a half that we’ve been in office — year and a half-plus. But we have a great relationship. Everybody in that room, by the time we left, got along. And they agreed to pay more, and they agreed to pay it more quickly….

Q President Trump, (inaudible) Romania. What will you tell President Putin about this summit and about NATO?

THE PRESIDENT: Well, I think he’s going to see about this summit — this has turned out to be a very successful summit. This is — I think, really, that NATO is more put together right now, is more coordinated. And I think there’s a better spirit for NATO right now than perhaps they’ve ever had. It’s richer than it ever was. The commitments are made at a higher level than they’ve ever been made. And the money, it will be paid out faster — far faster.

But this was a fantastic two days. This was a really fantastic — it all came together at the end. And, yes, it was a little tough for a little while, but ultimately — you can ask anybody at that meeting — they’re really liking what happened over the last two days. There’s a great, great spirit leaving that room….