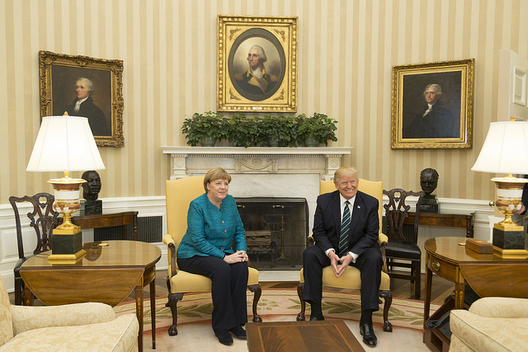 From Foreign Policy: In a sharply worded message to at least some countries in the 29-member alliance that didn’t meet defense spending thresholds — one that followed a general template but included additional language tailored to specific countries — Trump wrote that Americans were tired of funding Europe’s defense and wanted to see other NATO members carrying more of the load.

“[It is] increasingly difficult to justify to American citizens why some countries do not share NATO’s collective security,” said the letter, which was described to Foreign Policy by U.S. officials and foreign diplomats.

“I, therefore, expect to see a strong recommitment by [country] to meet the goals to which we all agreed,” it said.

The version being sent to Germany contained some of the harshest language, according to the officials….

The coming meeting, starting July 11 and featuring the leaders of all NATO countries, could be a fiasco thanks to Trump’s unpredictable and brash behavior.

“A no-news summit would be a good summit,” said one European diplomat who preferred not to be named discussing the upcoming event. “But at this point, we’re all scared shitless….”

“I don’t think anybody would be dumb enough to predict what would happen,” said one NATO official based in Brussels. “I’m hopeful [the summit] will go smoothly in that he’ll only make a few obnoxious remarks.”

From New York Times: “As we discussed during your visit in April, there is growing frustration in the United States that some allies have not stepped up as promised,” Mr. Trump wrote to Chancellor Angela Merkel of Germany in a particularly pointed version of the letter, according to someone who saw it and shared excerpts with The New York Times. “Continued German underspending on defense undermines the security of the alliance and provides validation for other allies that also do not plan to meet their military spending commitments, because others see you as a role model.”

In language that is repeated in letters to the leaders of other countries, including Prime Minister Justin Trudeau of Canada and Prime Minister Erna Solberg of Norway, Mr. Trump said he understands the “domestic political pressure” brought to bear by opponents of boosting military expenditures, noting that he has expended “considerable political capital to increase our own military spending.” But the president seemed to suggest that the United States might adjust its military presence around the world if its allies do not step and spend more for their own security.

“It will, however, become increasingly difficult to justify to American citizens why some countries do not share NATO’s collective security burden while American soldiers continue to sacrifice their lives overseas or come home gravely wounded,” Mr. Trump wrote to Ms. Merkel.

From AFP: US President Donald Trump has written to eight European NATO members to tell them to stick to their defence spending commitments, Belgian Prime Minister Charles Michel said Friday….

“I am not very impressed by this type of letter,” Michel told reporters at an EU summit in Brussels.

“Belgium has halted the systematic fall in defence spending and takes part in a lot of military operations.”

A diplomatic source told AFP the eight European countries to receive the letters, signed by Trump himself, were Belgium, Italy, Spain, Portugal, Luxembourg, Norway, the Netherlands and Germany.