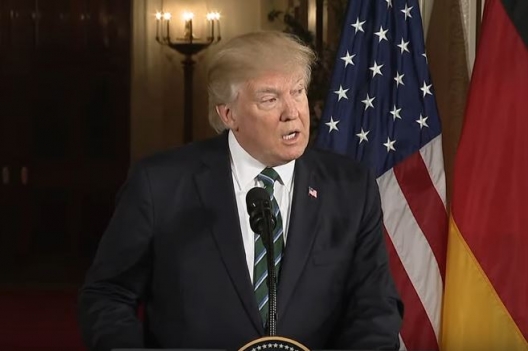 Donald Trump: I reiterated to Chancellor Merkel my strong support for NATO, as well as the need for our NATO allies to pay their fair share for the cost of defense. Many nations owe vast sums of money from past years and it is very unfair to the United States. These nations must pay what they owe.

During our meeting, I thanked Chancellor Merkel for the German government’s commitment to increase defense spending and work towards contributing at least 2% of GDP. I want to thank the Chancellor for her leadership in supporting NATO and its efforts in Afghanistan. This has come at significant costs, including the lives of over fifty German soldiers, whose sacrifice we greatly honor….

Angela Merkel: I was gratified to know that the president underlined how important he thinks NATO is. NATO is of prime importance for us. And it was not without very good reason that we said during our summit meeting in Wales that also Germany needs to increase its defense expenditure. We committed to this 2% goal until 2024. Last year we increased our defense spending by 8% and we are going to work together, again and again, on this. And we said that obviously that defense and security has a lot of different facets to it, on the one hand it’s supporting missions in Africa, for example, it’s also promoting development assistance. It’s also helping missions in Africa, for example, trying to stand up for their own safety and security.