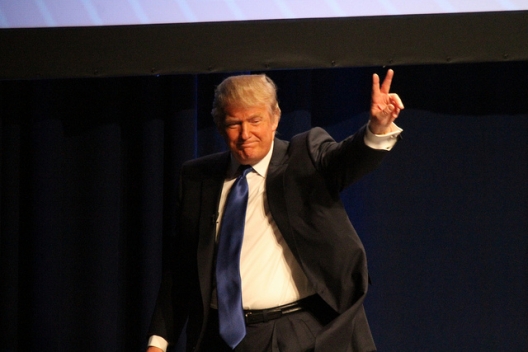 Donald J. Trump on Saturday went further than ever before in his criticism of the North Atlantic Treaty Organization, telling a crowd here that he would be fine if NATO broke up.

Mr. Trump had previously questioned the need for the organization, and on Saturday he reiterated his criticism that other NATO countries were “not paying their fair share” in comparison with the United States.

“That means we are protecting them, giving them military protection and other things, and they’re ripping off the United States. And you know what we do? Nothing,” Mr. Trump said at a subdued rally here on the outskirts of Milwaukee. “Either they have to pay up for past deficiencies or they have to get out.”

The role of the United States in NATO has become a point of contention here between Mr. Trump and his chief rival, Senator Ted Cruz of Texas, as the candidates battle to win the state’s 42 delegates in Tuesday’s primary. Mr. Cruz has criticized Mr. Trump’s comments on NATO, saying that the United States needed to support the organization’s fight against terrorism and to counterbalance Russia’s influence….

Later, at an event in Wausau, Wis., Mr. Trump seemed to acknowledge the controversy his initial remarks about NATO had prompted.

“I said here’s the problem with NATO: it’s obsolete,” Mr. Trump said, recounting his comments. “Big statement to make when you don’t know that much about it, but I learn quickly.”