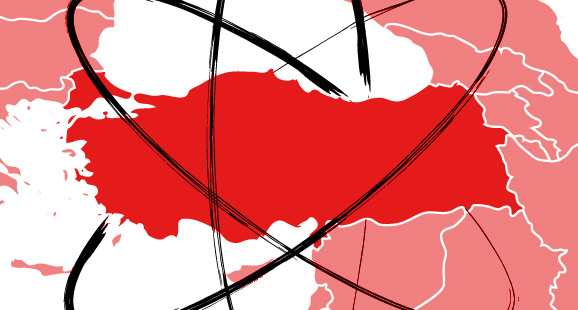 From Sinan Ülgen, Carnegie Endowment for International Peace:  Though most states that want a nuclear weapon can get one through determined effort, the fact remains that most choose not to proliferate. Turkey is no exception. Not even the prospect of a nuclear-armed Iran is likely to push Ankara to develop its own nuclear weapons. The only circumstance where such a scenario would acquire a degree of likelihood is a breakdown in Turkey’s security relationship with the United States.

As a member of the North Atlantic Treaty Organization, Turkey is host to Alliance nuclear weapons. Relying on this nuclear deterrent, Ankara has a very clean nonproliferation record and is actively pursuing a range of conventional forces to protect it from modern threats. It is unlikely that Turkey would voluntarily damage its relations with key allies and seriously complicate its international standing by choosing to proliferate. . . .

The NATO Debate and the Future of Tactical Nuclear Weapons

While planning for the 2010 NATO summit in Lisbon, the allies fiercely debated the status and practicality of the American tactical nuclear weapons in Belgium, Germany, Italy, the Netherlands, and Turkey. Many within the Alliance advocated for their removal, while others opposed, saying they should remain until the nuclear threat to NATO is removed.

Turkey quietly supports maintaining the weapons on its territory and expects other NATO countries to continue their tactical nuclear weapon stewardship as part of the Alliance’s burden-sharing principle. Turkey hosts an estimated 90 B61 gravity bombs at Incirlik air force base near Adana; 50 bombs are slated for use by the American air force, with the other 40 to be delivered by the Turkish air force.9  But the Turkish air force does not have aircraft certified for nuclear missions. Moreover the United States does not permanently maintain a nuclear fighter wing at Incirlik. Should these weapons have to be used, the United States would have to fly in a nuclear fighter wing from another European country. The scenario therefore raises a number of questions about these weapons’ operational readiness. Though Ankara has gone out of its way to emphasize its support for a nuclear weapons–free world, it has acknowledged that these efforts will likely take many years, prompting the need to maintain a credible minimum deterrent until disarmament is achieved. Turkish security elites also view nuclear weapons as a status symbol, believing that their presence firmly solidifies the U.S.-Turkish defense partnership. There is an assumption that if the weapons were removed, Turkey’s status in NATO would be negatively affected.10  The weapons are not only for deterrence but have a number of political implications and have come to symbolize the United States’ commitment to Turkey’s defense.

The direct link that the forward-deployed nuclear weapons establish between Turkey and the United States is also of relevance to those Turkish policymakers that are increasingly uncertain about NATO’s willingness and ability to honor its collective defense commitments under Article 5 of the North Atlantic Treaty. They have some reason to be wary. During the first Iraq war in 1991, the Turks requested the invocation of Article 5 so as to obtain a NATO-sponsored missile defense system. That request was blocked for several weeks at the NATO Council, and the episode is still fresh in the memory of the Turkish security establishment. This inability of the Alliance to act decisively at a time when Ankara believed itself to be threatened by Saddam Hussein’s weapons of mass destruction convinced Turkish policymakers to strengthen their security relationship with the United States as a hedge against the inability of NATO to honor its commitments to Turkey in a time of crisis. . . .

Turkey indicated that it would support the withdrawal of American tactical nuclear weapons if it was consulted beforehand and NATO was operating in consensus. Premature removal by the Americans could hurt the Alliance, but an Alliance-wide agreement would not be opposed by Ankara if a consensus could be reached. In its place, Ankara believes that NATO could rely on its conventional forces or other strategic and nonstrategic American nuclear forces for deterrence. . . .

Could Turkey Build the Bomb?

Living Without the Bomb

Turkey has a stellar history of nonproliferation and has signed on to every relevant IAEA and international instrument governing the spread of nuclear technology. Moreover, it is a member of NATO and an EU candidate country. It is unlikely, absent a rupture in relations with its NATO allies, a significant change in its security environment, or a drastic reevaluation of Ankara’s immediate interests by the civilian leadership, that Turkey would consider developing nuclear weapons illicitly.

A Turkish decision to proliferate would seriously complicate its international standing, undermine its economic resurgence, and seriously damage relations with the United States and its other NATO allies. Moreover, any Turkish move toward weaponization would draw a harsh rebuke from the United States and would likely be met by an American proposal to strengthen security guarantees, as well as the threat of sanctions if Turkey were to continue its weapons efforts. Given Turkey’s nonnuclear history and its long-standing reliance on the NATO security guarantee, it is hard to imagine a scenario where Turkey would simply cast aside its policy in favor of an independent weapons capability. . . .

For much of the Cold War, Turkey faced a nuclear-armed adversary. Instead of developing a small nuclear arsenal, Turkey chose to ally itself with the United States. But since the 1990s, Turkish policymakers have, in fact, been quietly dealing with the pressures of Iran’s nuclear program. Ankara has actively sought an independent missile shield to counter the growing threats posed by the proliferation of ballistic missiles. In tandem, it has adopted a conciliatory foreign policy favoring robust diplomacy and economic cooperation. The policy is aimed at decreasing regional tension, which officials believe will lessen Iran’s incentive to go nuclear, while developing technologies to protect Turkey from Iranian missiles.

An Iranian nuclear weapon would alter the balance of power and significantly constrain Turkish freedom of action in the region. If this were to occur, it is far more likely that Turkey will continue with its decades-old policy of relying on NATO’s nuclear policy for deterrence. The Turkish policy has thus far revealed a state more interested in pursuing soft power solutions to foreign policy problems. If faced with a nuclear trigger, Ankara would likely continue to strengthen ties with the traditional guarantors of its security.

Sinan Ülgen is a visiting scholar at Carnegie Europe in Brussels and author of "The European Transformation of Modern Turkey" with Kemal Derviş. A previous and more comprehensive version of this analysis was published by the Istanbul-based Center for Economic and Foreign Policy Studies (EDAM) as a result of a research funded by the Hewlett Foundation.  It is available at: www.edam.org.tr/eng/index.php?option=com_content&view=article&id=133&Itemid=220.  (graphic: Central Asia-Caucasus Institute)  (via Real Clear World)