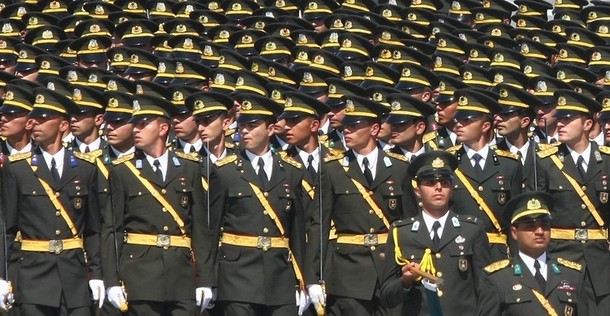 From Abdullah Bozkurt, Today’s Zaman:  A number of actions recently taken by government agencies in Turkey indicate that Ankara has been preparing for the inevitability of sending military troops to Syria to establish a humanitarian corridor. The corridor would be used to reach cities and towns under siege as well as possibly create a safety buffer zone for internally displaced persons (IDPs).

President Abdullah Gül and Defense Minister İsmet Yılmaz both signaled last week that a military option is on the table and Turkey must be prepared for the possibility. Prime Minister Recep Tayyip Erdoğan said on Saturday, the eve of his landmark visit to China, that Turkey will take its own measures against Syria after the UN deadline for the cease-fire in Syria. The Turkish Red Crescent (Kızılay) announced on Friday that it was preparing to deliver humanitarian aid to Syria in the event that Turkey or the international community calls for a “humanitarian aid corridor” inside Syrian territory.

What will happen if the UN cannot get its act together, and Russia and China end up using their veto powers for the third time? Ankara will probably invoke the 1998 Adana agreement with Syria to justify the military interference while calling on NATO members for the application of the Article 5 of the NATO Charter, which says that an attack on any member shall be considered to be an attack on all. The article was invoked by the US for the first time in October 2001, when NATO determined that the terrorist attacks on the twin towers of the World Trade Center in New York City were indeed eligible under the terms of the North Atlantic Treaty. Since the Assad regime allows the Kurdistan Workers’ Party (PKK) and its affiliates to launch attacks on Turkish soil and harbors some 1,500 to 2,000 hard-core PKK militants in areas close to the Turkish border, Turkey can very well utilize the NATO security cover for assistance. . . .

On Oct. 20, 1998, both Turkey and Syria signed the Adana Agreement, which set out very explicit terms for preventing PKK activities in Syria. It squarely puts all the responsibility on the Syrian government in this matter. For example, Article 1 of the Adana Agreement states that Syria will not permit any activity on its territory aimed at jeopardizing the “security and stability of Turkey.” Be it PKK terrorism or a crackdown on the opposition, both would be considered threats that seriously jeopardize the “security and stability of Turkey” — in which case Turkey reserves the right to take necessary measures for self-defense, including armed interference into Syrian territory to contain the threat. . . .

But the most comprehensive deal came in 2010 when the two sides inked a significant agreement on cooperation against terror. It was signed on Dec. 21, 2010 by Davutoğlu and Syrian Foreign Minister Walid Mouallem and ratified by the Turkish Parliament on April 6, 2011. This agreement has 23 articles, which have important implications for Turkey. For example, Article 7 of the agreement gives both parties the right to conduct joint operations in each other’s territory. If Turkey officially recognizes the Syrian National Council (SNC) as the only legitimate government of Syria, which is likely to happen in the upcoming Paris meeting of the Friends of Syria if Assad fails to follow through on the Annan plan, it can very well secure the consent of the SNC to launch joint operations with the Free Syrian Army against Assad’s forces. . . .

All in all, the urgency to act against the Assad regime’s aggression on its own citizens, in order to stabilize the country as soon as possible, is a sensitive issue for the national security of Turkey. For that Ankara is willing, even determined, according to some officials, to invoke unilateral or multilateral legal remedies at its disposal. It clearly prefers the multilateral approach for the time being. But when push comes to shove, Turkey will not hesitate to act alone, as it did in 1998 in Syria or in 1975 in Cyprus. Watch out for the signal that will indicate that Turkey is ready to act: When the government decides to seek a mandate from the Turkish Parliament for troop deployment in a foreign country, as it must according to the Constitution, it will mean the real warning shot for military incursion into Syria has already been fired.  (photo: Getty)