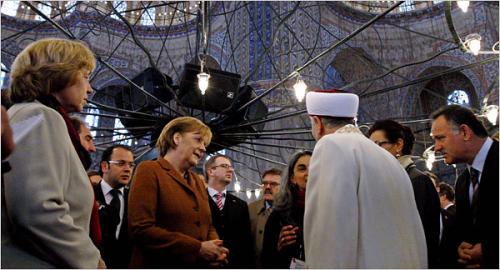 From the New York Times: Just as the German chancellor arrived in Ankara on Monday for bilateral talks, fraught with differences over education and accession to the European Union, a fresh rift seemed to have emerged over policies toward Greece, Turkey’s regional rival.

Egemen Bagis, Turkey’s chief negotiator with the European Union, has criticized Germany, along with France, for seeking to sell military equipment to Greece while pressing the government in Athens to make drastic public spending cuts as a result of its dire financial crisis. The pointed critique of Berlin and Paris was made in an interview last week in Brussels. ..

“One of the reasons for the economic crisis in Greece is because of their attempt to compete with Turkey in terms of defense expenditures,” Mr. Bagis said.

“Even those countries that are trying to help Greece at this time of difficulty are offering to sell them new military equipment,” he added. “Greece doesn’t need new tanks or missiles or submarines or fighter planes, neither does Turkey. It’s time to cut military expenditure throughout the world, but especially between Turkey and Greece. Neither Greece nor Turkey needs neither German nor French submarines.” (photo: Reuters)