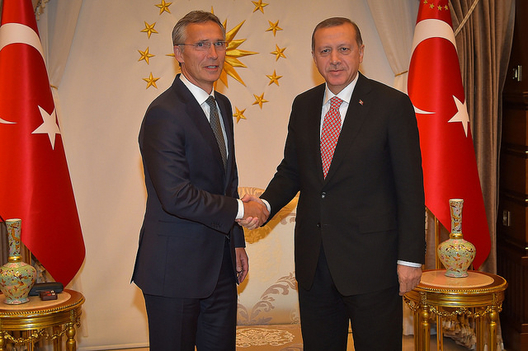 Amid claims that it no longer has a place in the Western defense alliance, Turkey is preparing for a greater role in the new NATO strategy expected to be approved in the NATO summit in Brussels on July 11-12….

One of them is for Turkey to assume the command of NATO’s Very High Readiness Joint Task Force (VJTF) in 2021. The formation of such a force was decided at the NATO Wales Summit 2014 as a “Spearhead Force” to the NATO Response Force (NRF) for the intervention of a possible crisis within a week. Seven NATO members contribute to it in six groups: The German-Dutch forces, the United Kingdom, France, Italy, Spain, Poland, and Turkey. It is a force of around 5,000 formed in five battalions supported by air forces, navies, and special forces of member countries….

Now, NATO is expected to approve a new strategy with more emphasis on collective defense, combat readiness, mobility, and cyber warfare. It is called the NATO Readiness Initiative (NRI). The idea is to form a force of 30 battalions (approximately the equivalent of eight brigades), 30 warships, and 30 fleets of fighter jets “ready to be employed” in 30 days when they are needed, according to diplomatic sources, who have asked not to be named. Member countries are expected to allocate the military units to be attached to this initiative by 2020. Turkey is among the few countries expected to assign additional military headquarters, which would be in direct contact with the new command to be formed (together with Spain and Poland).

Ankara is planning to suggest the 3rd Army Corps Headquarters in Istanbul as the contact headquarters for the NRI, which had also previously been designated for the NATO Response Force (NRF) since 2002. The 3rd Army Corps headquarters was one of the bases used by the plotters for the military coup attempt in July 15, 2016 but the government assured NATO officials there would be no problem left by the time Turkey assumes rotational command….

“Turkey abides by all NATO decisions taken,” one official source has told Hürriyet Daily News. “But we have two reservations, such as the binding clauses of the Montreaux agreement and to not attempt any action to agitate Russia, which we have not seen any violation of so far from our allies.”