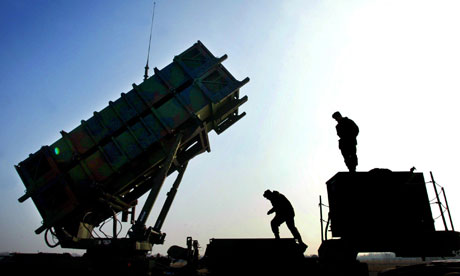 From Julian Borger, Guardian:  A request by Turkey for Nato Patriot missile defences to be deployed on its territory followed intelligence that the Syrian government was contemplating the use of missiles, possibly with chemical warheads, Turkish officials have told the Guardian.

The officials said they had credible evidence that if the Syrian government’s aerial bombardment against opposition-held areas failed to hold the rebels back, Bashar al-Assad’s regime might resort to missiles and chemical weapons in a desperate last effort to survive.

The Turks believe that the regime’s Soviet-era Scuds and North Korean SS-21 missiles would be aimed principally at opposition areas but could easily stray across the border, as Syrian army artillery shells and mortars have done.

A missile, especially with a chemical warhead, would represent a far greater threat to Turkish border communities, so Ankara decided last month to ask Nato to supply Patriot missile defence systems, which can spot an incoming missile and intercept it.

"We have intelligence from different sources that the Syrians will use ballistic missiles and chemical warheads," a senior Turkish official said. "First they sent the infantry in against the rebels and they lost a lot of men, and many changed sides. Then they sent in the tanks, and they were taken out by anti-tank missiles. So now it’s air power. If that fails it will be missiles, perhaps with chemical warheads. That is why we asked Nato for protection."

The New York Times reported that western intelligence officials had spotted new signs of activity around Syrian military sites where chemical weapons are stored. A senior US official was quoted as saying: "[T]hey’re doing some things that suggest they intend to use the weapons. It’s not just moving stuff around. These are different kind of activities."   (photo: Robert Vos/EPA)