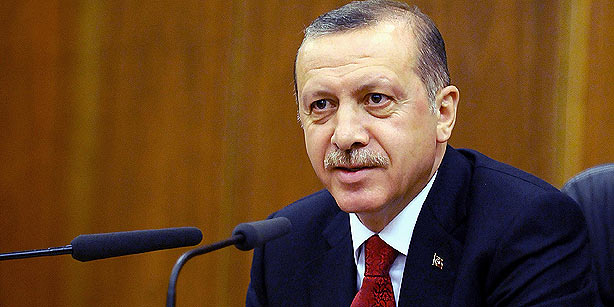 From Today’s Zaman:  Turkey has said it is now clear that Turkish fighter jet was shot down by Syrian security forces some 8 miles (13 kilometers) away from the Syrian town of Latakia over the Mediterranean Sea.

A statement released after the security summit headed by Turkish Prime Minister Recep Tayyip Erdoğan, army generals and other ministers, bluntly said that it is now clear that the fighter jet was shot down by the Syrian side.

Erdoğan earlier said it is not clear if a Turkish warplane reported missing near Syria was shot down by Syrian forces.  (photo: AA)

UPDATE: From MSNBC:  Turkey will take all necessary measures “decisively” once all the details of the incident emerge, said the office of Turkish Prime Minister Tayyip Erdogan after a two-hour security meeting. It did not specify what the steps would be.

UPDATE: From BBC:  The Syrian military has said it shot down a Turkish plane "flying in airspace over Syrian waters", according to state-run news agency Sana.

UPDATE: From Adrian Blomfield, Telegraph: Mr Erdogan promised that Turkey’s response would be both "decisive" and carried out with "determination." Although he did not divulge what steps he was contemplating, a senior member of his ruling party had earlier declared that if the aircraft was shown to have been shot down by Syria it would amount to a "declaration of war."