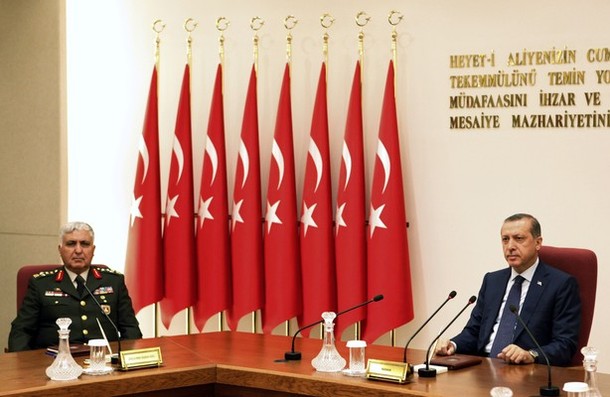 From Ümit Enginsoy, Hurriyet Daily News:  When Turkey’s top decision-making body on arms procurement meets later this month, it is not expected to select a much-awaited system for the country’s long-range air and missile-defense program , in the wake of Syria’s downing of a Turkish jet, a senior procurement official said July 6.

“A few weeks ago, a decision may have been likely, but internationally the situation is not clear now,” the procurement official said.

The Defense Industry Executive Council is expected to hold its three or four-monthly meeting during the week starting July 16. Prime Minister Recep Tayyip Erdoğan, Defense Minister İsmet Yılmaz, Chief of General Staff Necdet Özel, and Murad Bayar, chief of the Undersecretariat for Defense Industries, are members of the panel. The meeting had originally been tentatively scheduled for July 4 and then for July 12. It has now been delayed until after July 16.

The long-range air-defense program has been up for grabs for at least two years. Competitors for Turkey’s long-range air and missile systems include U.S. partners Raytheon and Lockheed Martin with their Patriot-based system; Eurosam with its SAMP/T Aster 30; Russia’s Rosoboronexport, marketing the country’s S-300 systems; and China’s CPMIEC (China Precision Machinery Import and Export Corporation), offering its HQ-9. Eurosam’s shareholders include MBDA – jointly owned by British BAE Systems, Italian Finmeccanica and pan-European EADS – and France’s Thales. These companies will work with Turkish partners.  (photo: Reuters)