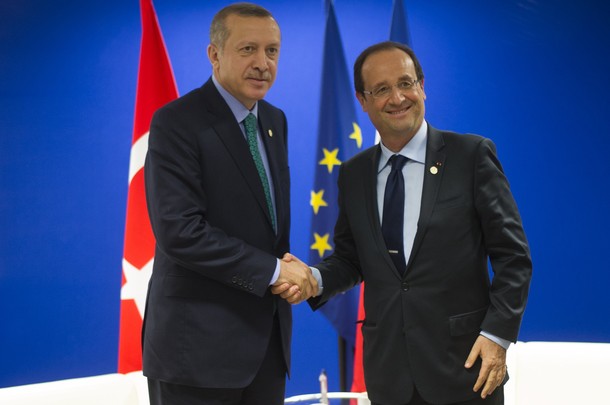 From Reuters:  Turkey has agreed to restore all ties with France, Foreign Minister Ahmet Davutoglu said on Thursday, following a breakdown in relations last year prompted by a simmering dispute over the 1915 mass killing of Armenians by Ottoman Turks.

Ankara cancelled all economic, political and military meetings with Paris in December after France’s lower house of parliament voted overwhelmingly in favour of a draft law to make it illegal to deny that the killings amounted to genocide. . . .

"The prime minister gave the necessary instructions after meeting with Hollande. Because of this new attitude from France, these sanctions will be dropped," Davutoglu said during an interview with news broadcaster CNN Turk.

Davutoglu said he would travel to Paris on July 5 for bilateral meetings where they would discuss taking additional "positive steps" in the future.  (photo: Getty)