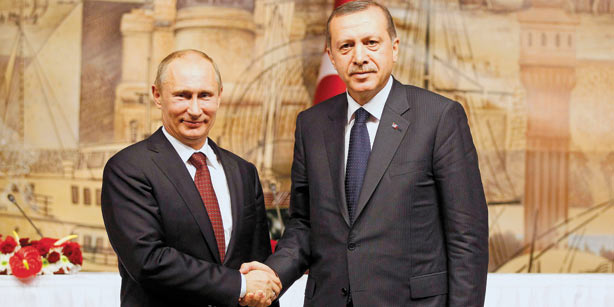 In a recent TV interview Erdoğan was asked a simple, almost a "too shy" question about where the government is on the EU process for Turkey’s full membership, and his response was blunt.

The EU wants to forget about us, but hesitates, and cannot really forget. But if it said what it truly feels, we would be only relieved. Instead of wasting our time, it should be open and explain, so that we can go about our business. You sit and talk with them, but they can’t really do speak convincingly. When things go so poorly, you inevitably, as the prime minister of 75 million people, seek other paths. That’s why I recently said to Mr. [Vladimir] Putin: ‘Take us into the Shanghai Five; do it, and we will say farewell to the EU, leave it altogether. Why all this stalling?‘

In a follow-up comment at the same programme he added that the Shanghai Five is "better, much stronger" than the EU.

What he said is not really new, for all those who follow his discourse and contacts. There were some reports last summer that Erdoğan had mentioned this idea to Putin in a meeting with the Russian president.

But this time Erdoğan put more emphasis on what he meant and put it into the larger EU context. This repetition of intent only strengthens the perception that he has been elaborating around the idea and he will not let it go.

Is this just a throwing of cards over to the EU table? I think not. Erdoğan, always being himself, means what he says. He did not utter those words to shake and stir Turkoskeptical parts of the EU, nor as a threat. He is, as he says, seeking new paths to place Turkey in a geostrategic context where its economic strength will match its political choreography.

He reflects the frustration that Europe treats a member of the G-20 and the world’s 16th economic power — now with a very powerful, stable, consumerist middle class — as a second-rate country and, in his eyes, very unfairly as a pariah.

From Today’s Zaman:  Turkey’s aspirations for membership in the Russian and Chinese-led Shanghai Cooperation Organization (SCO) might materialize as the organization moves towards admitting new members, the Chinese Ministry of Foreign Affairs said in a special talk with Today’s Zaman.

“The SCO is working on improving the administrative and financial basis for new members. The member states of the SCO will meet and make a decision together on the applications proposed by states that are interested in joining,” said a senior Chinese official on Friday.

In addition, he said the SCO observes the principle of openness and values the partnership with observer countries, including Turkey as a dialogue partner, adding that “the SCO is mapping out detailed cooperative measures.”  (photo: Osman Orsal/Reuters)