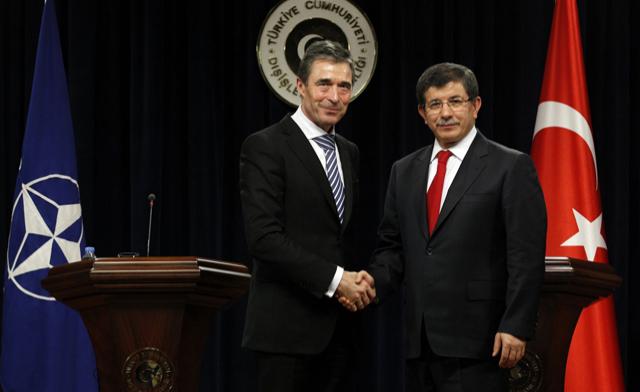 From AFP:  Turkey will never allow any third country, particularly Israel, to use intelligence obtained by a NATO radar system, its foreign minister said on Friday.

“We will never allow any third country to use any NATO facility. Our position will be even more clear if it is particularly Israel,” [Turkey’s Foreign Minister Ahmet] Davutoglu told a joint news conference with visiting NATO chief Anders Fogh Rasmussen in Ankara.

His remarks came after some media outlets reported that the United States and Israel have carried out a joint missile test by using intelligence gathered by a NATO radar system based in eastern Turkey.

Last year Ankara decided to host in a military facility base near Malatya in the southeast an early warning radar as part of NATO’s defense architecture.
“It is a NATO system and we appreciate that Turkey has agreed to host one of the facilities,” said Rasmussen.

“Data are shared within our alliance among the allies. It is a defense system to protect the populations of NATO allies,” he added without mentioning Israel, which is not a NATO member.

From Fatma Demirelli, Today’s Zaman:  Before agreeing last autumn to host a US radar on its soil as part of a NATO-backed missile defense system, Turkey went to great lengths in protracted negotiations with the US to secure guarantees that the data to be collected by the system will not be shared with ally-turned-foe Israel and that Israel’s nemesis Iran will never be mentioned as a threat.  (photo: Reuters)