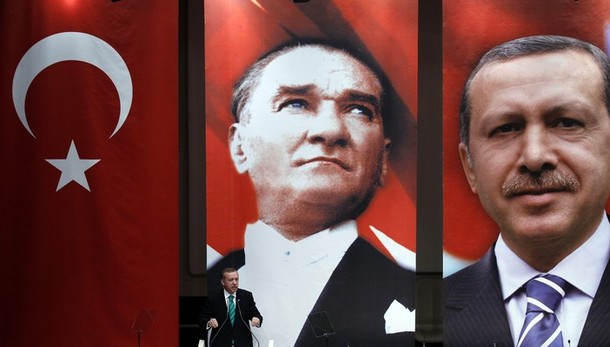 From the Hürriyet Daily News:  Prime Minister Recep Tayyip Erdoğan addressed party members at his group meeting Tuesday, making references to the military coups that took place in Turkey in the past and to the executions that happened at the time of the coup.

“The referendum is a democratic right,” Prime Minister Recep Tayyip Erdoğan said. “On Sept. 12, [2010,] the people will not vote for the performances of the government or the opposition but they will vote for their future. I believe wholeheartedly that they will choose the path of democracy, which is ‘Yes,’” he said.

Erdoğan touched on the executions of leftists and conservative national idealists, or ülkücü, after the military coup of Sept. 12, 1980.

Struggling to hold back his tears, Erdoğan related the stories of two young activists who were executed after the coup. …

The Sept. 12, 1980, coup d’etat occurred after years of ideological battle and instability in Turkey and established an authoritarian regime that subdued all political parties very harshly. After taking power, the military administration drafted a new Constitution, which was accepted in a popular vote in 1982.  (photo: Reuters)