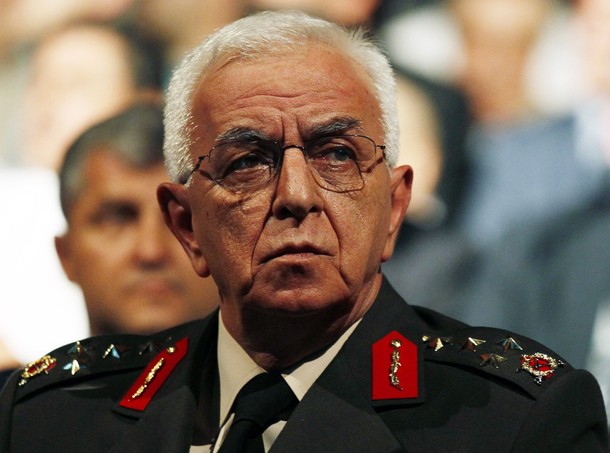 From Suzan Fraser, the AP:  The government and armed forces announced a compromise Monday on the appointment of Turkey’s two top military positions – an agreement that showcased growing civilian authority over the military, which once shaped the country’s politics.

Prime Minister Recep Tayyip Erdogan refused last week to approve the military’s first choice for land forces commander, overturning an old practice in which the government rarely resisted such appointments despite its power of final approval for promotions within the ranks.

Erdogan’s veto meant the current land forces commander, Gen. Isik Kosaner, had no replacement and could therefore not be named army chief of staff at the end of a four-day military council meeting last week.

The deal was reached late Sunday. President Abdullah Gul‘s office announcing early Monday that Gen. Erdal Ceylanoglu had been appointed land forces commander. That freed Kosaner to advance to chief of staff and oversee Turkey’s land, navy, air and gendarmerie forces for the next three years. …

"We’re not going to give the nod to everyone," Erdogan told reporters Sunday. "We also have certain rights."

The impasse was the latest round in a power struggle between the government and military, which have sparred since Erdogan’s Islamic-oriented party came to power in 2003. The military considers itself the guardian of Turkey’s secular principles. …

Kosaner, 65, will take over command of NATO’s second largest army after the United States, from Gen. Ilker Basbug, who retires this month.

The general has led Turkey’s land forces for the past two years. His previous positions included commander of the Turkish Military Academy and the Turkish forces in northern Cyprus.

Ceylanoglu, also 65, will lead the land forces until his retirement next year.  (photo: Reuters)