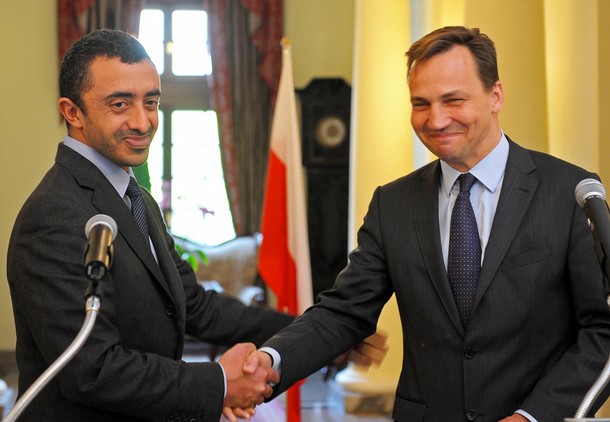 From AFP:  The United Arab Emirates is to make a landmark move, becoming the first Arab country to send an ambassador to NATO, Poland’s Foreign Minister Radoslaw Sikorski said Wednesday.

"We’re very happy that the United Arab Emirates is to become the first Arab country to open an embassy at the North Atlantic Treaty Organisation," Sikorski told reporters after talks with his visiting UAE counterpart Sheikh Abdullah bin Zayed al-Nahyan.

Accrediting an ambassador to NATO is seen as a key step for countries seeking to cement ties with the 28-nation, trans-Atlantic alliance. . . .

"This request falls within the new NATO partnership policy approved by NATO members’ foreign ministers at their meeting in Berlin on April 14-15," she noted. . . .

The UAE already belongs to NATO’s Istanbul Cooperation Initiative, launched at an alliance summit in the Turkish city in 2004, which aims to bolster bilateral security cooperation with countries in the Middle East.

From Emirates News Agency:  "It is important to have an Arab voice at these essential gatherings as it gives a window to voice the Arab perspective on various issues that are of importance to the region", the paper [Gulf News] said in its yesterday’s editorial. The UAE has of late been very actively involved at the international stage which is welcome as the country has been playing an important role especially when it comes to promoting the Arab cause, it concluded.  (photo: Getty)