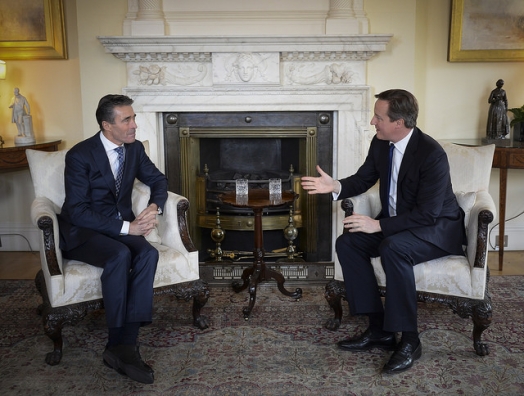 The Prime Minister met with NATO Secretary General Anders Fogh Rasmussen this afternoon ahead of the forthcoming biennial summit which the UK will host in Wales in September. Secretary General Rasmussen thanked the PM for offering to host the summit and the leadership and commitment to the alliance it shows from the UK.

The 2 leaders agreed that a key focus of the summit would be the future role of NATO in an uncertain world. In this context, they discussed the importance of applying the lessons learnt and capabilities developed from missions in the Balkans, Iraq and Afghanistan and how NATO could play a role in stabilising countries and preventing conflict in the future. They also discussed the situation in Afghanistan, ahead of presidential elections this spring and ISAF drawdown at the end of the year.

The PM highlighted the work this government has done to increase public recognition and support for our armed forces and veterans through the Armed Forces Covenant. He suggested that we would be keen to share our experience in this area with more NATO countries.

They also discussed the important role of NATO’s maritime forces and the need to effectively deal with cyber threats in the future. They agreed that the summit should reaffirm NATO’s relevance as the bedrock of transatlantic collective defence capability.