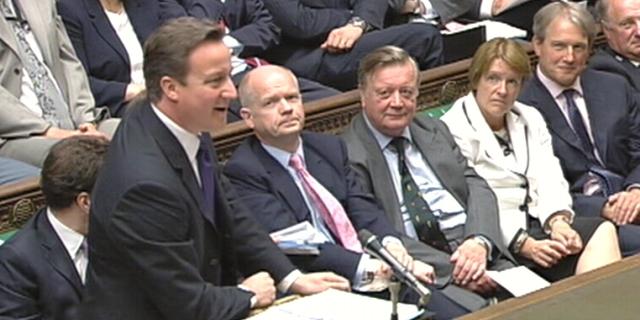 After a marathon eight-hour debate, Cameron lost a vote that was initially seen as a symbolic motion setting up a final vote in the days ahead authorizing force against Syrian President Bashar al-Assad’s regime for allegedly using chemical weapons. But the surprise loss of even the weaker piece of legislation — by a vote of 285 to 272, including a group of rebels from Cameron’s Conservative Party in opposition — appeared to cost the United States its centerpiece ally in a still-forming coalition. The rejection additionally signaled what analysts called the biggest rupture in the U.S.-British “special relationship” since the 1982 Falklands war.

Technically, Cameron could still authorize military strikes over the objection of Parliament, but top government officials — including the prime minister himself — indicated that was not an option following Thursday’s defeat.

“It is clear to me that the British Parliament, reflecting the views of the British people, does not want to see British military action,” Cameron said after losing the vote. “I get that, and the government will act accordingly.”

The rejection — which dealt Cameron the most powerful setback of his premiership and came as one lawmaker shouted “resign” as the vote was read out — amounted to an extraordinary turn of events in Britain. . . .

The reluctance to back a possible U.S.-led mission, analysts said, marked a rare and major jolt to U.S.-British relations, the strategic pillar of transatlantic policy for decades that has seen Washington and London forge one of the closest military alliances of modern times.

“To not support the U.S. would be very damaging to the U.K., damaging to our relationship with the U.S. and to our global standing,” said Richard Kemp, the former commander of British forces in Afghanistan. “Britain would be diminished if we didn’t fight. . . .”

The government first sensed major trouble after several hours of debate, following an announcement by [opposition Labor Party leader, Edward] Miliband that Labor lawmakers would vote against Syria action — marking the first time in nearly five decades that a British opposition party has rejected a government motion for military intervention.

The true depth of his opposition, however, had remained unclear, with some analysts predicting he was merely staking out a political position against a preliminary motion for action that would be reversed after U.N. weapons inspectors produced a report in the coming days. Yet the additional defection of lawmakers from the ruling coalition of Conservatives and Liberal Democrats away from the government motion ultimately doomed Cameron.