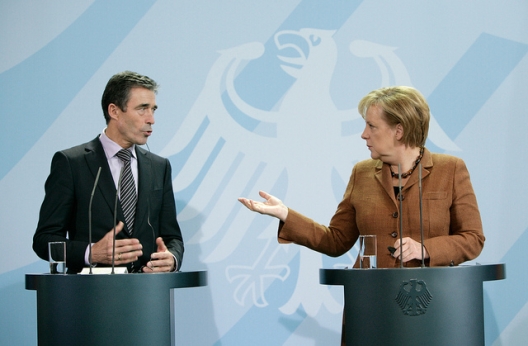 Frank-Walter Steinmeier wasted little time after returning to Berlin from the NATO foreign ministers’ meeting in Brussels last week. He went straight to parliament to inform German lawmakers of the decisions reached. And he did so in the manner which he would like to be perceived as he negotiates the ongoing Crimea crisis: calm, reserved and to-the-point. Indeed, the only time he showed any emotion at all during last Wednesday’s meeting of the Foreign Affairs Committee was when he spoke of NATO General Secretary Anders Fogh Rasmussen.

Earlier, Rasmussen had published an op-ed in the German daily Die Welt saying that the path to NATO membership was fundamentally open to Ukraine. “The right of sovereign states to determine their own way forward is one of the foundations of modern Europe,” he wrote. That, though, marked a significant departure from Germany’s own focus on de-escalating the burgeoning confrontation with Russia. “NATO membership for Ukraine is not pending,” Steinmeier huffed. He said that foreign policy was in danger of becoming militarized, adding that it was about time for political leaders to regain the upper hand.

Steinmeier, though, is fully aware that the course Rasmussen is charting won’t disappear any time soon. Already, preparations have begun for the next NATO summit of alliance heads of state and government in September. Thus far, there is only one item on the agenda: a new strategy for NATO. Berlin is skeptical. And concerned. . . .

If Russia is now planning its future against the West rather than with the West, then the question regarding a “modern deterrence” must be posed, a senior Defense Ministry official told SPIEGEL.

Prior to the Ukraine crisis, there were many asking what purpose NATO would serve once the alliance’s troops had withdrawn from Afghanistan. But now that Putin has taken over the Crimea — leading countries on the alliance’s eastern edge to feel threatened — the mood in NATO’s Brussels headquarters has changed dramatically. General Secretary Rasmussen, one NATO source said, has “positively blossomed.” And the US, Britain and most Eastern European member states support him.

Senior officers within NATO are demanding internally that the readiness of Western ground troops and air forces be increased. Currently, it would take 180 days for the requisite forces to be moved into place ahead of any operation. That time lag, argue military leaders, needs to be shortened, a proposition that would also affect up to 10,000 German troops. In addition, say military leaders, tank units should be strengthened and munition depots filled. Polish Foreign Minister Radoslaw Sikorski even proposed stationing two NATO brigades (up to 10,000 troops) in his country. That, however, would require the construction of barracks, depots and equipment storage facilities to house them.

The Chancellery in Berlin is wary of such proposals. “We shouldn’t give the Russians any cause for accusing us of breaching treaties,” officials there say. In 1997, NATO committed itself to refrain from stationing large numbers of troops in former Warsaw Pact member states. Doing so now would be a provocation of a new dimension.

As such, Foreign Minister Steinmeier is focusing exclusively on diplomacy. His ministry is currently developing an “Action Plan for Ukraine,” which is to elucidate all of Berlin’s support for the new Ukrainian government. All of the ministries involved in that support are taking part in creating the action plan, the Foreign Ministry says. But the Ministry of Defense is not one of them. Steinmeier also provided the impetus for last week’s trip of several state secretaries to Ukraine, one for each ministry involved in Berlin’s support for Kiev. Again, the Ministry of Defense was not represented.

Yet there is certainly a military aspect to the issue. Already, Ukraine has sent a request to NATO headquarters for the delivery of radios, weapons and munitions from alliance stores. At the same time, Defense Minister Ursula von der Leyen has asked senior German generals to examine what the alliance could do to provide additional support to NATO member states in Eastern Europe. NATO has asked alliance members to make additional contributions over and above the already agreed to increase to air-policing sorties and AWACS surveillance flights. Proposals are to be submitted to NATO headquarters by mid-April. Von der Leyen is likely to propose joint military maneuvers involving Germany, Poland and the Baltic states. A NATO maneuver planned for 2015 in Southern Europe could also be moved up and shifted to the east. But the minister has rejected sending heavy equipment or troops for an extended period. . . .

Volker Kauder, the head of the parliamentary group for Merkel’s conservative Christian Democrats, opposes such ideas. “The current situation with the Crimean crisis has absolutely zero influence on the Bundeswehr’s defense projects,” he claims. So far, that’s an opinion that has been shared by Defense Minister von der Leyen.