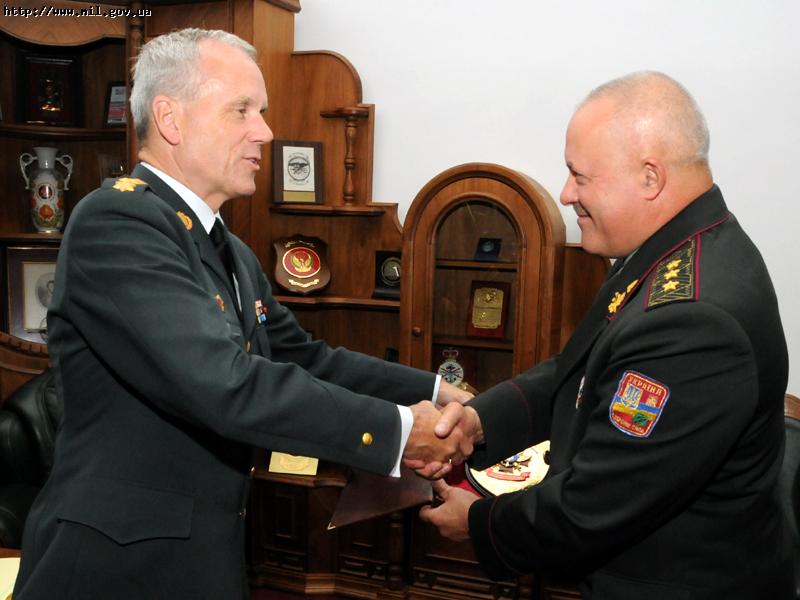 From the Ministry of Defense of Ukraine:  Chief of the General Staff of the Ukrainian Armed Forces Colonel General Volodymyr Zamana held official talks with Chairman of the NATO Military Committee General Knud Bartels.

He [Gen. Zamana]  said that the current partnership of Ukraine and NATO being held in a spirit of constructivism and mutual benefit.

Colonel General Volodymyr Zamana also stressed that Armed Forces of Ukraine seek to be not only consumers, but active contributors to establishment of peace and security in the world. Thus, Ukraine would like to increase its contribution in NATO-led peacekeeping missions and operations.

Chairman of the NATO Military Committee General Knud Bartels thanked Ukrainian delegation for the detailed briefing. He pointed out that NATO fully supports the Ukraine’s initiatives, emphasizing on the country’s worthy contribution to the NATO Response Force.

From the Ministry of Defense of Ukraine: Defense Minister Dmytro Salamatin has met with Chairman of the NATO Military Committee General Knud Bartels within the NATO military delegation official visit to Ukraine. . . .

“Ukraine highly appreciates its status of the Alliance reliable partner. I am sure that we will develop and improve our cooperation in the future,” Dmytro Salamatin said.

From NATO:  Gen. Knud Bartels, Chairman of the NATO Military Committee, visited Ukraine from 5 to 7 September for a series of high level talks on Ukraine Defence reform and NATO-Ukraine operational cooperation. . . .

“The Ukraine decision to contribute with naval support to NATO-led Operation Ocean Shield is a valuable contribution not only to the operation but on the overall NATO-Ukraine forces cooperation and interoperability,” Gen. Bartels said.