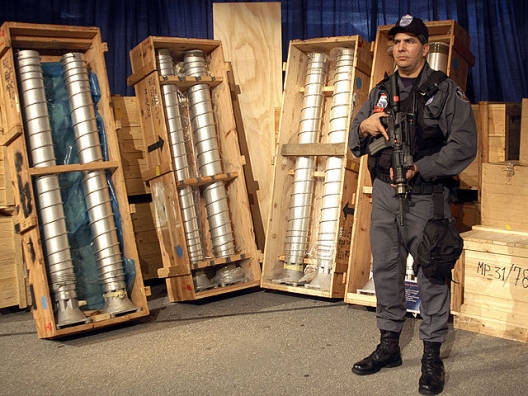 A U.N. nuclear team will visit Libya this month to assess the safety of thousands of barrels of milled uranium – known as yellowcake – amid concerns about the country’s deteriorating security situation, a U.N. official said on Monday.

“With respect to yellowcake, we have received information indicating that 6,400 barrels are stored in a non-functional former military facility close to Sabha in the south,” U.N. Libya envoy Tarek Mitri told the Security Council.

“They are under control of a Libyan army battalion,” Mitri told the 15-nation council. An inspection team from the International Atomic Energy Agency will visit this month to verify the stockpiles and storage conditions, he said. . . .

The enriched uranium required for use in atomic reactors or weapons is produced in centrifuges that spin uranium hexafluoride gas (UF6) at high speeds. The UF6 is derived from yellow cake, a milled concentrate from mined uranium ore. . . .

Mitri said the U.N. Support Mission in Libya has received preliminary information on MANPADS from Tripoli but has asked for more details about the MANPADS under control of the Libyan government. He said the United Nations was looking for greater cooperation from “international partners” on arms proliferation in Libya.

“Further to the verified destruction earlier this year of almost 9 metric tons of mustard gas, an inspection team from the Organization for the Prohibition of Chemical Weapons is expected to visit later this month,” he said.