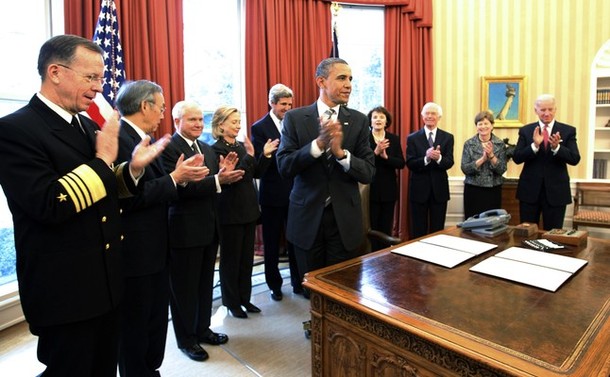 From RIA Novosti:  The United States expects to hold talks with Russia on tactical nuclear weapons (TNW) within a year after the New START arms reduction treaty comes into force, President Barack Obama said in a message to the Senate on Wednesday.

"The United States will seek to initiate, following consultation with NATO Allies but not later than 1 year after the entry into force of the New START Treaty, negotiations with the Russian Federation on an agreement to address the disparity between the non-strategic (tactical) nuclear weapons stockpiles of the Russian Federation and of the United States," the message reads.

Earlier on Wednesday, Obama signed ratification papers for the New START – a keystone of his painstaking effort to reset relations with Russia.

When ratifying the New START deal in December, the United States Senate adopted a resolution obligating the government to start bilateral talks on cutting the TNW stockpiles – landmines, artillery shells and short-range missiles. Washington says Moscow has a larger number of these systems.  (photo: Jason Reed/Reuters)