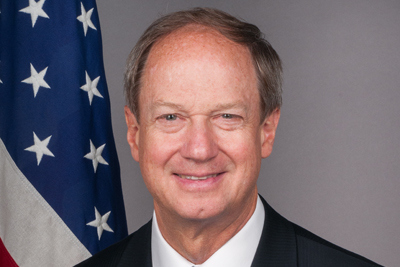 People call the United States the indispensable nation , yet from the new roles that NATO has embraced, to the engagement of trans-Atlantic partners in Afghanistan and Kosovo, to developments in the broader Middle East, to our partnership in humanitarian and development efforts around the world, to our efforts to keep our citizens safe from the very real threats posed by terrorism, to our collective response on Syria, it is the close trans-Atlantic cooperation that is indispensable.

Notwithstanding the security threats we all face, if the postwar era was about our shared security, it is my hope that the 21st century can be about our shared prosperity.  Without a doubt, the evolution of NATO transformed international relations.  We now face another turning point in our common history and that of the globalized world.  With TTIP, the Trans-Atlantic Trade and Investment Partnership, we have an extraordinary opportunity to build, on the foundation of our shared values, a new strategic political and economic framework for this century.  Concluding this agreement is more than just a means of enhancing economic growth on both sides of the Atlantic.  TTIP could be the true “peace dividend” that many spoke of after the fall of the Berlin Wall.

By creating the largest allied market in the world, it will strengthen economies on both sides of the Atlantic and create jobs for Americans, for Germans, and for all Europeans; but it will also provide the strategic foundation for a broader, global pronouncement of the common values we share.  Just as the new NATO transcends security issues, TTIP is more than a trade and investment agreement.  It, too, will be a cornerstone of trans-Atlantic relations.  The broad economic cooperation that it represents will put in place a new structure for global peace and prosperity.  It goes without saying that this is in everybody’s best interests. . . .

The fact is, our vibrant trans-Atlantic relationship is not an inherited trait; its value needs to be transmitted from one generation to the next.

So this will be my priority: to strengthen and multiply the bridges between our two countries and across the Atlantic through renewed strategic, economic and interpersonal initiatives, based upon our shared values.  Working together with the strong partners in this region and around this country, we can ensure that the ties that bound us during the second half of the 20th century will be transformed in ways that will guarantee the evolution of our indispensible interconnectedness throughout the coming years and decades.