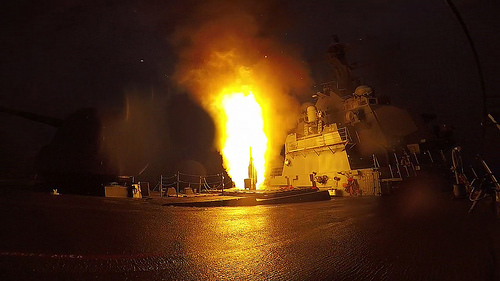 This is first time a Standard Missile-3 (SM-3) Block IA guided interceptor was fired on a non-U.S. range and the first intercept of a ballistic missile threat in the European theater.

For the scenario, a short-range Terrier Orion ballistic missile target was launched from Hebrides Range and was inflight simultaneously with two anti-ship cruise missiles fired at the coalition task group. Ross fired a SM-3 and successfully engaged the ballistic missile target in space. In its air defense role, USS The Sullivans (DDG 68) fired a SM-2, which is the first time a SM-2 was fired on the Hebrides Range.

There are a number of firsts associated with this event including:

First intercept of a ballistic missile target in the European theater
First SM-3 fired on a non-U.S. range.
The first firing of an SM-2 and SM-3 on the Hebrides Range, United Kingdom.
First use of multi-national beyond line of sight link architecture for IAMD purposes in the European theater.
First international ship (Netherlands and Spain) transmissions of BMD cues to a U.S. BMD guided missile destroyer.
First time coalition IAMD used in a scenario with simultaneous attack from anti-ship cruise and ballistic missiles.

This test demonstrates the commitment of the United States to the defense of Europe through our four Aegis ships forward deployed to Rota, Spain, and shore station in Romania.

The Maritime Theater Missile Defense forum was established in 1999 as a co-operative body for participating navies to develop improved cooperation and promote interoperability in sea-based missile defense.

From US 6th Fleet:  The execution of the live-fire exercise is a clear demonstration of the forum’s ability to safely conduct effective coalition sea-based defense against simultaneous anti-ship and ballistic missile threats within an operational scenario….

This exercise demonstrates the commitment of the United States to the defense of Europe through our Aegis ships and our shore station in Romania, as well as the professional performance of our allied Sailors.

Excerpts from statement by Admiral Mark Ferguson, Commander of US naval forces in Europe and Africa.