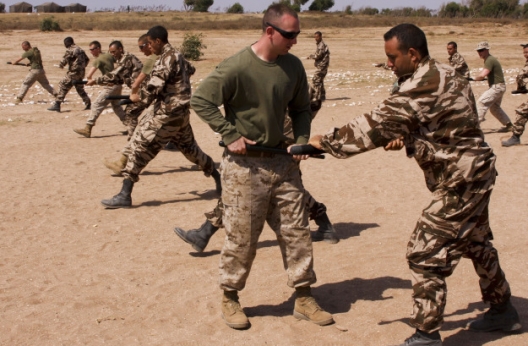 Last month, discussing the Obama administration’s plans for a more modest Middle East policy, National Security Adviser Susan Rice noted that Washington “can’t just be consumed 24/7 by one region, important as it is.” From now on, she implied, countries in the region, including Libya, would be relegated to second-tier priority.

As she spoke, the U.S. military’s Africa Command (AFRICOM) was preparing to step up its assistance in Libya to help the country rebuild its weak security sector. Over the summer, AFRICOM, along with the militaries of Italy, Turkey, and the United Kingdom committed to help train, advise, and equip a new Libyan army — a “general purpose force,” in formal military terms. The plan seems reasonable on paper. Trained at overseas bases outside Libya, the new force will allow the government to project its own authority, protect elected officials and institutions from the militias operating within the country, and compel the militias to demobilize and disarm. Washington sees the effort as a crucial step in Libya’s democratic transition and as a way to halt extremism and prevent the country’s lawlessness from spilling over its borders.

But the force’s composition, the details of its training, the extent to which Libyan civilians will oversee it, and its ability to deal with the range of threats that the country faces are all unclear. And the stakes are enormous. There are signs that some militias within Libya are trying to bloody the new army’s nose before it even enters the fight: a campaign of shadowy assassinations against military officers, particularly in the east, is likely half vendetta against representatives of the old order and half attempt to deter the central government’s monopolization of military force.

The case of a separate and underreported U.S. effort to train a small Libyan counterterrorism unit inside Libya earlier this year is instructive. The unit, set up by U.S. special operations forces, was hardly representative of Libya’s regional makeup: recruitment appeared to be drawn overwhelmingly from westerners to the exclusion of the long-neglected east. In addition, the absence of clear lines of authority — nearly inevitable given Libya’s fragmented security sector — meant that the force’s capabilities could just have easily ended up being used against political enemies as against terrorists.

Things came to a head in August, when a tribal militia launched a pre-dawn raid on the poorly guarded training camp near Tripoli. No U.S. soldiers were there, but the militia did make off with sensitive U.S. military equipment. And that spelled the end of the mission; the effort was aborted and U.S. forces went home. (The Libyan government and U.S. special operations forces are currently searching for a new training site inside Libya to restart it.) Drawing lessons from this fiasco, the United States and its NATO partners have wisely decided that the new training mission for the general purpose force will take place outside Libya — in Bulgaria, Italy, Turkey, and the United Kingdom. But that alone won’t be enough to ensure that the effort doesn’t face more significant hurdles. . . .

Given resource constraints and Washington’s reasonable aversion to putting boots on the ground, the training of the general purpose force might seem like an appropriate level of U.S. engagement in Libya. Still, if the United States doesn’t want to leave the country worse off, it should think very carefully about that force’s composition, mission, and oversight before the program begins. It must also heed those who argue that the mission should be accompanied by broader assistance designed to help Libya work through the economic and political challenges that underlie its insecurity.

Image: US and allies will train new army outside of Libya (photo: AFRICOM)