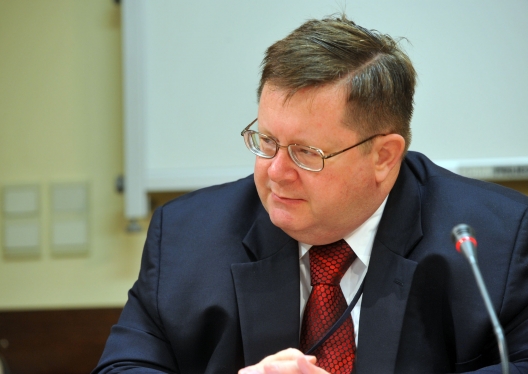 The Bureau of European and Eurasian Affairs regrets to announce the death of our dear colleague and friend, Robert F. “Bob” Simmons, Jr.

Bob, a Washington, DC resident, died in his hometown of Rochester, NY, on December 24, 2013. He most recently served as Senior Advisor in the Office of South Central European Affairs (EUR/SCE), where he focused on NATO integration and regional political-military affairs in the Western Balkans. A career Foreign Service and Civil Service Foreign Affairs officer, Bob spent eight years on NATO’s International Staff from 2003-2011, where he served as Deputy Assistant Secretary-General for Security Cooperation and Partnership (including responsibilities for NATO-Russia, NATO-Ukraine, and NATO-EU relations), and concurrently served as Special Representative of the Secretary-General for the Caucasus and Central Asia. He earned the respect and admiration of U.S., Allied and other foreign counterparts for his diplomatic skills and creativity in addressing policy challenges.

Among other assignments, Bob had served as the senior Arms Control and Disarmament Agency (ACDA) Representative to the negotiations that resulted in the 1987 Treaty on the Elimination of U.S. and Soviet Intermediate Range Weapons (the INF Treaty) and later served as the Deputy U.S. Representative to the Special Verification Commission. He had also served tours in the U.S. Mission to NATO, U.S. Embassy Islamabad and domestically in EUR.
Bob is survived by his sisters Catherine (Richard Cohen) Simmons-Gill and Ann (Eric Funke) Simmons, brother Edward (Darlene Karl) Simmons, nephews Matthias (Mae Chang) PaVon, Robert F. Simmons III and nieces Summer (Chris Dick) PaVon and Keara MacDermind, special friend Anne Canfield and numerous other friends and colleagues throughout the world.

Funeral services were held December 30 at the Church of the Blessed Sacrament in Rochester, NY. A memorial service will be planned in Washington, DC, at a date to be determined.

Image: Robert Simmons was the US policy coordinator for the NATO summit in Chicago (photo: NATO)