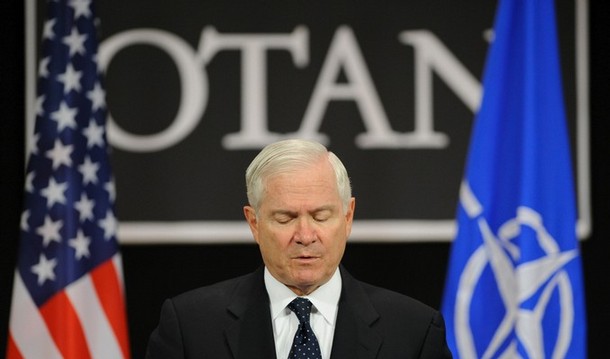 From Max Boot, Commentary:  Bob Gates is leaving the Defense Department with a bang—or at least a blast—rather than a whimper. Today in Brussels he gave a tough speech blasting NATO allies for failing to do more and warning that the alliance faces a “dim, if not dismal future” unless they step up their contributions. . . .

[T]he trends have been present for decades. And just as long American policymakers have been decrying European free-loading—without achieving any real changes.

The problem is that European states devote such a large share of their GDP to social welfare programs that they simply have no money left to spend on defense. The real novelty today is that with their reckless spending binge President Obama and Congress are placing us in the same dire fiscal distress as the Europeans. Obama is devoting more and more of the budget to entitlements and other domestic programs—leaving less and less for defense.

Jawboning the Europeans to step up their spending isn’t going to achieve any concrete results. We might as well grow up and realize that if we don’t play “globocop” nobody else will—and our interests, above all, will suffer. That is why it is so irresponsible for Obama to advocate even deeper defense cuts—he wants to cut $400 billion more over the next decade—at a time when we face so many crises around the world. We know the Europeans aren’t going to fill the gap. Either we do it, or it doesn’t get done—and well pay the price.

That may not be fair but neither is life.  (photo: Reuters)