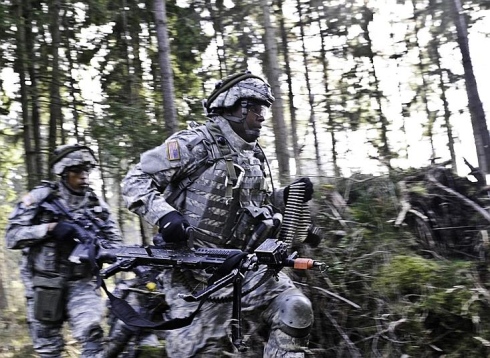 From the Department of Defense:  The Department of Defense announced today that it is revising its 2004 plan to withdraw two of its four brigade combat teams (BCTs) from Europe.   Based on the administration’s review, consultations with allies and the findings of NATO’s new Strategic Concept, the department will retain three BCTs in Europe to maintain a flexible and rapidly deployable ground force to fulfill the United States’ commitments to NATO, to engage effectively with allies and partners, and to meet the broad range of 21st century challenges.  This decision will be implemented in 2015, when we project a reduced demand on our ground forces.

The three BCTs remaining in Europe after 2015 — the Heavy, Stryker and Airborne BCTs — offer capabilities that enable U.S. European Command to build partner capacity and to meet interoperability objectives while supporting the full range of military operations, including collective defense of our NATO allies under Article 5 of the Washington Treaty.

This BCT mix will be complemented by other capability enhancements, including the forward deployment of Aegis ships, land-based missile defense systems in Poland and Romania as part of the European Phased Adaptive Approach, forward-stationing of special operations aircraft, and a permanent aviation detachment in Poland.  Taken together, these measures will enhance and rebalance the U.S. force posture in Europe to make it more capable, more effective, and better aligned with current and future security challenges.

From Geoff Ziezulewicz, Stars and Stripes:  The command oversees the 170th Infantry Brigade in Baumholder, the 172nd Infantry Brigade in Schweinfurt, and the 2nd Stryker Calvary Regiment in Vilseck, all in Germany, plus the 173rd Airborne Brigade, which has battalions at Bamberg, Germany, and Vicenza, Italy.

The Pentagon release announcing the decision states that USAREUR will retain an airborne, Stryker and “heavy” brigade. That appears to mean the 2nd SCR and 173rd will stay put, while either the 170th or 172nd will head home.

Friday’s long-expected announcement continues the military’s slow but steady shift from its Cold War posture, when roughly 400,000 U.S. troops were stationed in Europe to keep the Soviet Union at bay.

In the last five years, the military has consolidated its overseas bases into five main hubs. And last year, it announced the closure of 22 Army installations between 2010 and 2015.

Moving a brigade back to the States will cut U.S. forces in Europe by about 5,000 personnel.  (photo: Stars and Stripes)