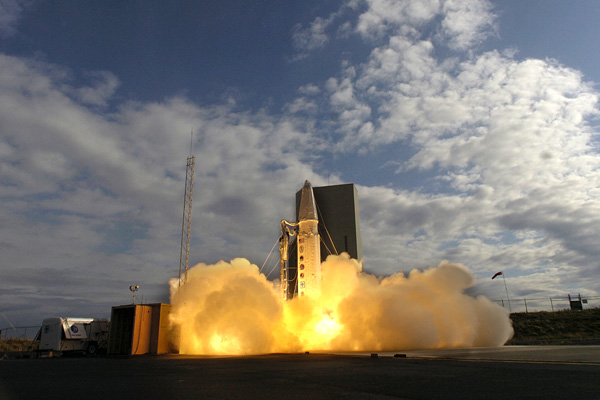 The move counters North Korea’s threat of a unprovoked nuclear attack on the United States, even though the administration says the Stalinist regime is still years away from having the capacity to launch such an assault on the continental United States. North Korea has made significant improvements in its long-range missile technology, and has successfully launched a missile test in space, making the additional protection a prudent precaution, Hagel said. . . .

Undersecretary of Defense James Miller presaged the decision in a speech Tuesday. He said the United States has the ability to quickly deploy up to 14 additional missile interceptors “if needed.”

“Our policy is to stay ahead of the threat — and to continue to ensure that we are ahead of any potential future Iranian or North Korean ICBM capability,” he said.

From Mark Thompson, TIME:  Pyongyang recently threatened to attack the U.S. with a nuclear weapon.

“We will strengthen homeland missile defense by deploying 14 additional ground-based interceptors, GBIs, at Fort Greely, Alaska,” Defense Secretary Chuck Hagel said. “These additional GBIs will provide a nearly 50% increase in our missile defense capability.” There are currently 26 interceptors based in Alaska, and four at California’s Vandenberg Air Force Base.

From Thom Shanker, New York Times:  The new interceptors are scheduled to be deployed by 2017, at an estimated cost of just under $1 billion. . . .

The interceptors in California and Alaska are to blunt a long-range missile threat from North Korea. The United States also deploys Patriot Advanced Capability batteries in South Korea for defense of targets there.

Japan is also developing its own layered missile-defense system, which includes Aegis warships and Patriot systems, as well.

The United States deploys one advanced TPY-2 missile-defense tracking radar in Japan to enhance early warning across the region and toward the West Coast, and it has reached agreement to deploy a second.   (photo: Sandia National Labs)