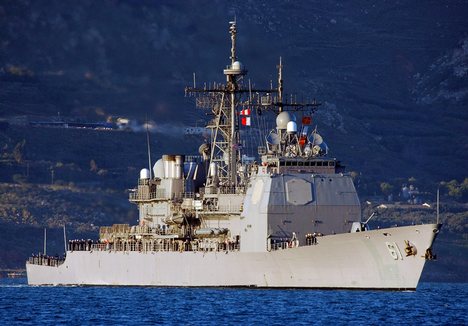 From Lolita C. Baldor, the AP:  The U.S. is sending a special radar-equipped warship to the Mediterranean Sea next week, the first step in the development of a broad anti-ballistic missile system to protect Europe against a potential Iranian nuclear threat, the Pentagon said Tuesday.

The move marks the first of the Obama administration’s four-phase plan to put land- and sea-based radars and interceptors in several European locations over the next decade.

Endorsed by NATO during a summit in Lisbon last Fall, the missile shield has triggered opposition from Russia and set off lengthy negotiations over the future expanded ability to shoot down ballistic missiles in the region.

John F. Plumb, principal director for Pentagon nuclear and missile defense policy, said Tuesday that the USS Monterey will leave Norfolk, Va., next week, heading to a six-month deployment in the Mediterranean. The ship’s mission, he said, will lay the groundwork for the unfolding missile defense plan there.

"Here is our first concrete demonstration of our commitment to the missile defense of our deployed forces, allies and partners in Europe," Plumb said in an interview. "We said we were going to do it, and now we’re doing it."  (photo: World News)