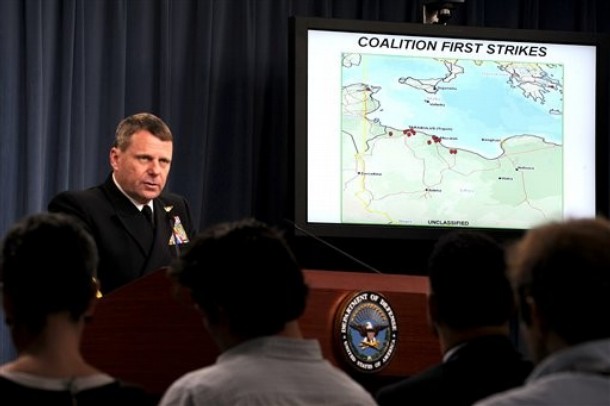 The U.S. will conduct a damage assessment of the sites, which include SA-5 missiles and communications facilities.

The salvo, in an operation dubbed "Odyssey Dawn," was meant "to deny the Libyan regime from using force against its own people," said Gortney, who declined to detail future operations.

Shortly after the first missile attacks, U.S. President Barack Obama informed the American people of the efforts by a "broad coalition."

"The use of force is not our first choice," the president said from Brasilia, Brazil. "It is not a choice I make lightly. But we cannot stand idly by when a tyrant tells his own people that there will be no mercy. …"

Obama is planning for the U.S. portion of the military action in Libya to only last for a few days, according to a senior administration official.

"In terms of the heavy kinetic portion of this military action, the president envisions it as lasting days, not weeks," the senior official said. "After that we’ll take more of a supporting role. …"

The French Defense Ministry said its attack aircraft being used to take out tanks and artillery have deemed Benghazi and the surrounding area an "exclusion zone."

The French are using surveillance aircraft and two frigates in the operation to protect civilians. The aircraft carrier Charles De Gaulle will soon depart Toulon, France.

"Our air force will oppose any aggression by Colonel Gadhafi against the population of Benghazi," said French President Nicolas Sarkozy, speaking after an international, top-level meeting in Paris over the Libyan crisis.

"As of now, our aircraft are preventing planes from attacking the town," he said, calling the intervention a "grave decision."  (photo: AP/DoD)