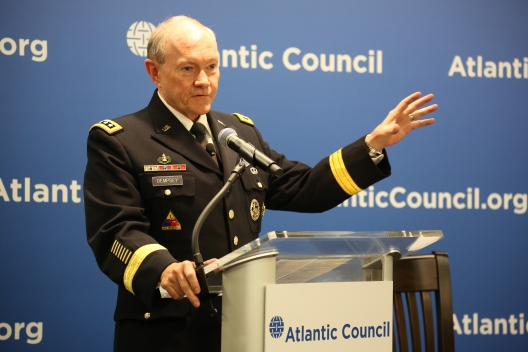 Dempsey: My personal view is that this is a moment for NATO to decide what it intends to be in the future. You know, the NATO alliance has done a great job in partnering with us in Afghanistan. That showed the alliance was willing to look beyond its own borders and become a regional force for good and stability. Now I think the crisis in Ukraine is causing NATO to look back to its own backyard, and forcing it to decide whether it still has the capability and capacity to reassure its member states – especially those Eastern countries that embraced NATO as it enlarged in the 1990s – that the alliance remains credible. So the Ukraine crisis is a challenge to the international order, and we should respond to it as part of our NATO alliance.

Dempsey: That’s exactly right. But back to my “Two, Two, Two and One,” construct, deterrence has a somewhat different meaning in each case. With the two heavyweights Russia and China, that’s clear state-on-state deterrence. With the middleweights like Iran and North Korea, deterrence takes on a different role, because they can be less predictable and more roguish. And when you’re talking about networks like al-Qaeda and its affiliates, I’m not sure you can deter a network – I think you just have to defeat it. But to your point about NATO and Russia, when you’re talking about an alliance of nations and state actors, in that case I think we do need to revisit what it means to “deter.”

Excerpt from interview of Chairman of the Joints Chiefs of Staff General Martin Dempsey by James Kitfield, Defense One.

Image: Chairman of the Joints Chiefs of Staff General Martin Dempsey, May 14, 2014