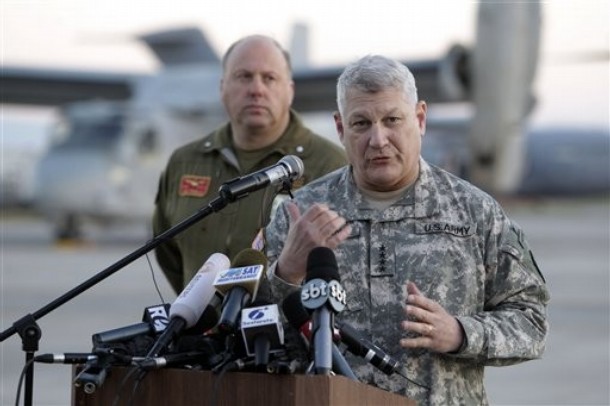 From Donna Cassata, the AP:  The military force unleashed on Libya by the U.S. and its partners upset several African nations despite the international community’s widespread concerns over Moammar Gadhafi’s use of force against his own people , the top U.S. commander for the continent told Congress on Tuesday.

Gen. Carter Ham, commander of the U.S. Africa Command, described the mixed reaction from the African Union to the airstrikes and enforcement of a no-fly zone over Libya, and his imperative to explain the need for swift action to perturbed nations. His comments came as the U.S. military drastically slashed the number of air and naval forces committed to the operation, now under NATO control.

"I think frankly as we proceed I’m going to have the responsibility, as I engage with our African partners, to have a very frank discussion about what U.S. Africa Command’s role was and why we did what we did and just be as truthful and forthright as I can," Ham told the House Armed Services Committee.

He added: "There is an impact and there will be an impact in the region."

The war in Libya entered its third week with no end in sight and growing frustration throughout the region. The head of the African Union, Equatorial Guinea President Teodoro Obiang Nguema, expressed his support for Gadhafi and demanded an end to foreign interference into what he called an internal Libyan problem.  (photo: AP)