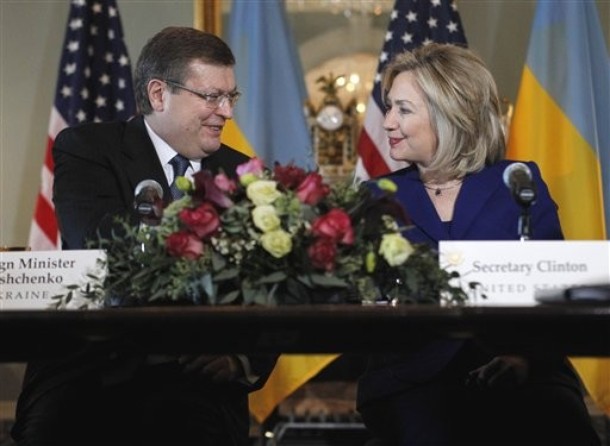 From RIA Novosti:  The United States has officially confirmed that it will render Ukraine $50 million to support the country’s nuclear security program.

U.S. Secretary of State Hillary Clinton met with Ukrainian Foreign Minister Kostyantyn Hryshchenko in Washington on Tuesday as part of the third session of the U.S.-Ukraine Strategic Partnership Commission. …

Ukraine, which was briefly left with the world’s third largest nuclear arsenal after the breakup of the Soviet Union, agreed to give up the remaining stockpiles of highly enriched material by the next nuclear summit in 2012.

From the U.S. Department of State:  Secretary Clinton and Foreign Minister Gryshchenko underlined both parties’ commitment to securing all vulnerable nuclear materials and to increasing cooperation in nuclear security and non-proliferation. They welcomed the substantial progress made toward implementation of the Joint Statement issued by the Presidents of Ukraine and the United States during the 2010 Nuclear Security Summit. In December 2010, a substantial amount of Ukraine’s highly-enriched uranium was removed, with support from the United States. The Ukrainian party reconfirmed its commitment to get rid of its remaining highly-enriched uranium by the 2012 Nuclear Security Summit. The U.S. party reconfirmed its commitment to provide necessary technical and financial assistance valued at approximately $50 million by the time of the 2012 Nuclear Security Summit as part of this effort, including financial and other resources necessary for the construction of a state of the art neutron source facility that will enhance civil nuclear cooperation.

The parties noted the significant progress toward the elimination of Ukraine’s SS-24 solid missile propellant and the destruction of its SCUD missiles. …

The United States and Ukraine confirmed their readiness to continue political dialogue and practical cooperation in the context of the Ukraine-NATO partnership. Secretary Clinton and Foreign Minister Gryshchenko welcomed the NATO Lisbon Summit decisions and the Alliance’s readiness to develop partnerships with Ukraine, as specified in the NATO Strategic Concept. The United States welcomed Ukraine-NATO interaction in strengthening international peace and security and continued Ukrainian participation in NATO-led and other international peacekeeping operations and in deployments to Afghanistan, Iraq, Kosovo and Liberia.