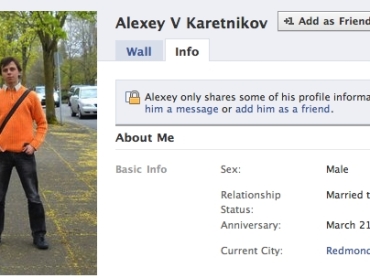 From Jerry Markon, the Washington Post:  Federal authorities detained a 12th person in their investigation of a Russian spy ring in the United States, and he has been deported to Russia, U.S. law enforcement officials said Tuesday.

The man, Alexey Karetnikov, entered the United States in October and was living in the Seattle area, where he worked at Microsoft, according to federal officials and the company. Karetnikov, a Russian citizen in his early-to-mid-20s, had been held on immigration violations because there was insufficient evidence to charge him with a crime, the government officials said.

"He was just in the early stages; had just set up shop," said one senior federal law enforcement official, who spoke on the condition of anonymity because the details of the case were closely held. The official added that the FBI was monitoring the Russian almost immediately upon his arrival and that he had "obtained absolutely no information. …"

The Russian admitted he was illegally present in the country and agreed to the deportation in lieu of further court proceedings, said [spokesman for DHS Matt] Chandler, who added that Karetnikov "would face criminal and civil penalties if he returned without express U.S. government permission.”

Lou Gellos, a Microsoft spokesman, confirmed that Karetnikov had worked at the company for about nine months as a software tester. He said Karetnikov is the man whom authorities deported on Tuesday but would not comment further.  (photo: CBS)