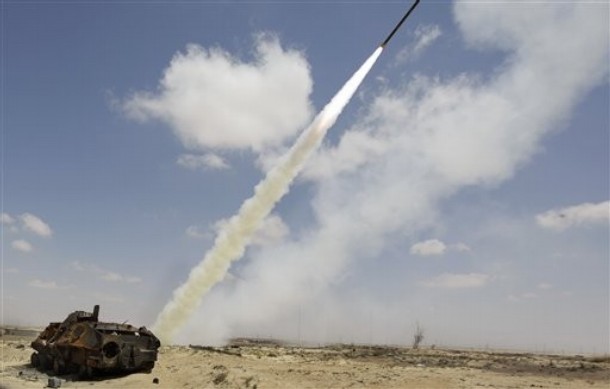 From Stephen Braun, the AP:  The U.S. is paying two European mine-clearing groups nearly $1 million to hunt and dispose of loose anti-aircraft missiles that could make their way from Libyan battlefields to terror groups.

The hiring of weapons demolition experts hardly dampens concerns about anti-aircraft missiles still in the hands of the Gadhafi regime’s military, which amassed nearly 20,000 of the weapons before the popular uprising started in March.

The State Department’s hiring of British and Swiss weapons demolition teams in Libya to search for missiles, mines and other deadly munitions was prodded by fears that terrorists could use scavenged man-portable air defense systems, known as MANPADS. The action came after American and allied authorities made it clear to Libyan opposition figures that their cooperation on the missile launchers would be a factor in future assistance, said U.S. and United Nations officials familiar with the discussions.

"From the U.S. point of view, it was an issue of paramount importance," said Justin Brady, officer-in-charge of the U.N. Mine Action Service, which is overseeing the weapons disposal effort in Libya. "The Libyans seemed to get the big picture of what was necessary to present a credible international face."

The move has no effect on the massive numbers of mostly Russian-built anti-aircraft launchers and missiles still in the hands of Moammar Gadhafi’s forces. While some shoulder-held and truck-mounted launchers were pillaged by rebel forces when they seized Libyan ammunition stocks, the vast majority are still held by the regime. . . .

The Obama administration listed the nearly $1 million anti-MANPADS effort this week in a report to Congress defending the legality of its intervention in Libya. The report included classified documents detailing a "threat assessment of MANPADS, ballistic missiles and chemical weapons in Libya."  (photo: AP)