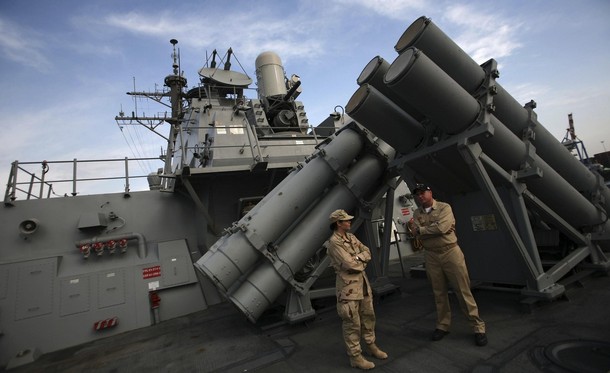 From Craig Whitlock, the Washington Post:  The U.S. military is on the verge of activating a partial missile shield over southern Europe, part of an intensifying global effort to build defenses against Iranian missiles amid a deepening impasse over the country’s nuclear ambitions.

Pentagon officials said they are nearing a deal to establish a key radar ground station, probably in Turkey or Bulgaria. Installation of the high-powered X-band radar would enable the first phase of the shield to become operational next year.

At the same time, the U.S. military is working with Israel and allies in the Persian Gulf to build and upgrade their missile defense capabilities. The United States installed a radar ground station in Israel in 2008 and is looking to place another in an Arab country in the gulf region. The radars would provide a critical early warning of any launches from Iran, improving the odds of shooting down a missile.

The missile defenses in Europe, Israel and the gulf are technically separate and in different stages of development. But they are all designed to plug into command-and-control systems operated by, or with, the U.S. military. The Israeli radar, for example, is operated by U.S. personnel and is already functional, feeding information to U.S. Navy ships operating in the Mediterranean. …

U.S. foots most of bill

The Pentagon says the purpose of the European missile defense system is threefold: to protect Europe, to protect U.S. forces stationed there and to deter Iran from further development of its missile program.

It is a good deal for Europe, which is largely getting the protection for free. NATO allies, however, may eventually plug their own, more limited missile defense systems into the overall shield.

The Pentagon says countries that are providing territory for radar and ground interceptors will probably make financial contributions as negotiations are finalized. But otherwise, U.S. taxpayers will be footing the bill. U.S. defense officials said it is difficult to provide an overall estimate on what it will cost to build and operate the European shield, given that the Aegis ships and other components either already exist or were going to be built anyway by the U.S. military. The system will require an unspecified number of new SM-3 missiles, which cost between $10 million and $15 million apiece.

In November, during a summit in Lisbon, NATO members will vote on whether to make territorial missile defense part of the alliance’s overall mission.

If that happens, allies will eventually connect their localized missile defense systems — mainly Patriot missiles and other ground-based interceptors — to the larger framework. The United States and NATO would also have to sort out a unified command-and-control system, which could take years, officials said.  (photo: Reuters)