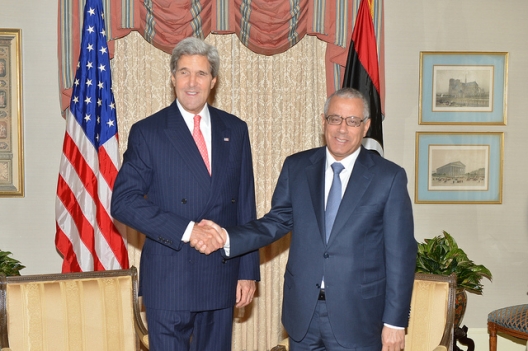 At the request of Prime Minister Ali Zeidan, the United States, Britain and Italy have agreed to train 5,000 to 8,000 troops, many of whom will be drawn from existing militias. The recruits will be taken outside of Libya for military instruction and what a senior U.S. defense official described as an attempt to “shift attitudes and create new allegiances” to the central government. . . .

The United States and its partners, who say they are training to “NATO standards,” are not the only ones moving to fill the security vacuum. A wealth of outside actors are rushing to bolster favored militias or to capi­tal­ize on the oil-rich country’s prevailing anarchy. Turkey is conducting military training for up to 3,000 Libyan recruits, and wealthy Persian Gulf states — as well as private companies and black-market arms dealers — are supplying favored groups. Morocco, Algeria and Tunisia also have expressed willingness to play a role in training Libya’s security forces, U.S. officials said.

“We have certainly seen multiple agendas playing out in the course of multiple external partners,” said the U.S. defense official, who spoke on the condition of anonymity to describe the touchy situation and U.S. goals.

For now, Libya’s government and legislature are weak and divided along a deepening fault line. On one side is a liberal-leaning coalition known as the National Forces Alliance, supported by heavily armed militias from the western mountain town of Zintan. On the other side are Islamist groups that include the Muslim Brotherhood and Islamist militias.

The more secular alliance supports Zeidan, along with Libya’s Defense Ministry, and controls Tripoli’s international airport and other major installations. Its Islamist rivals are more closely affiliated with the Interior Ministry. . . .

Even as the United States is shipping Humvees to the government, a Qatari businessman, who insisted that his name not be used, said he recently completed a $14.8 million deal that would supply 100 armored Toyota Land Cruisers to Islamist militias under the umbrella of Libya’s Interior Ministry.

When Libya’s deputy chief of intelligence, a man with ties to Islamists, was kidnapped last month from the Tripoli airport, his allies blamed the Qaqaa brigade.

Islamist militia leaders say they think that Western biases, prevailing anarchy and a lack of transparency mean that their more-secular foes ultimately have more to gain from the creation of a new force.

“Most of the guys who will get this training are from the Gaddafi regime,” said Moheidin al-Mejberi, an Islamist militia leader in Benghazi, referring to the more secular tribal alliance and the Zintan militias.

The United States is putting the finishing touches on a refurbished facility at Bulgaria’s Novo Selo training range, where it expects to receive an initial tranche of up to 350 Libyan recruits by spring. Plans call for a total of 4,000 troops eventually to be trained there, along with 2,000 each trained by Italy and Britain in those countries.

The Italians plan to pay for the training themselves; Libya will foot the bill for the Americans and British.

Lists of recruits are being compiled by the Libyan Defense Ministry, although “the pieces are still coming together” and no names have been provided to the United States, the U.S. defense official said.

The lists will be turned over to the U.S. Africa Command for vetting. Officials said they will use U.S. intelligence and other resources to exclude anyone with a connection to al-Qaeda.