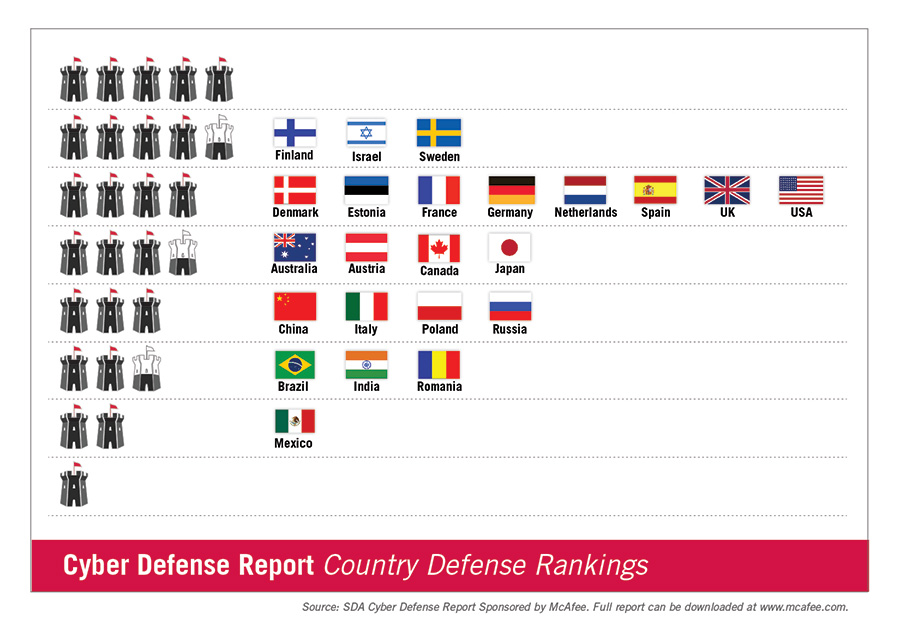 From Zachary Fryer-Biggs, Defense News:  The U.S. ranked behind Finland, Israel and Sweden in a new report analyzing the ability of countries to defend themselves against cyber attacks. The report pointed to information-sharing limitations as one of the key stumbling blocks for U.S. security, giving the country four out of a possible five stars.

“Government only inhales, it never exhales,” said Jason Healey, director of the Cyber Statecraft Initiative at the Atlantic Council. He was part of a panel assembled for the release of the report Jan. 30. “It will take all the information, but it will find any excuse to not share.”

The reputational rankings appeared in “Cyber-security: The vexed question of global rules,” a report based on surveys with 250 leaders in 35 countries that rated 23 countries. Produced by the Security & Defense Agenda, a Brussels-based think tank, and the cybersecurity company McAfee, the report used a methodology developed by Robert Lentz, former deputy assistant secretary of defense for cyber, that measures preparedness based upon a country’s technology and available pool of expertise.

While ranked as even with Germany, France and the United Kingdom, among others, the United States was ahead of China and Russia, which only received three stars. The two countries are often cited as the source of the vast majority of cyber attacks, with those emanating from China appearing to be state-sponsored espionage and those from Russia likely financial crime related.  (graphic:  McAfee)